We may not be here much longer if the arsonists have their way! 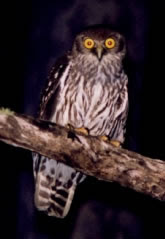 A 'controlled fuel reduction burn' is planned in the next week or so for the Grantville Flora and Fauna Reserve next to our property and we are not too happy about it. But of course there is nothing we can do because general public opinion demands that the Department of Sustainability and Environment conducts burns on native vegetation to make it 'safe'.

We have expressed our objection to the planned burn and I must say that we feel more threatened by the prospect of a deliberate burn being ignited by DSE staff and our local CFA than by a wildfire which may start naturally.

So many of these 'controlled' burns (which the proponents say are necessary to reduce the understorey load they see as a threat) get out of control because they are deliberately lit on inappropriate days when wind shifts are likely. Rarely is an assessment made of the actual threat to 'assets'.

The vegetation here is generally wet forest and it's going through a natural transition which will be set back by human interference in the form of a widespread burn. OK, it's reasonably dry at the moment, but putting a burn through now will not reduce the fire threat next year – it may in fact increase the danger for residents in the Adams Estate which is an old and inappropriate subdivision. They have been clamouring for a burn to 'protect assets' without any understanding of fire behaviour or fire ecology. This fire will kill koalas, bandicoots, possums and other wildlife. It's likely that immediately after the 'controlled burn' residents will have problems with snakes looking for a new home. Countless will be killed by panicky people wielding spades.

But at the end of it all, the fire threat will be the same next year – nothing will have changed except more native wildlife will have been killed and more habitat will have been modified for no purpose other than appeasing an insatiable demand for 'someone to do something' about the threat of wildfire.

The current Royal Commission into last year's fires will probably come up with nonsense about justifying the need for more burns – even though those are likely to increase fire danger by changing vegetation types from damp to dry.

Anyway, no-one will take any notice of us. But if this 'controlled burn' get out of hand and generates problems, DSE can expect a bit of trouble. Who is going to be out there finding burned animals? Who is going to euthanase those too badly burned to be rehabilitated? What happens next year if a wildfire goes through and this year's burn is seen as a useless exercise? There's not much point in trying to find somone to blame. And who cares?
Posted by freeranger at 6:37 PM No comments:

New silo should help our efficiency 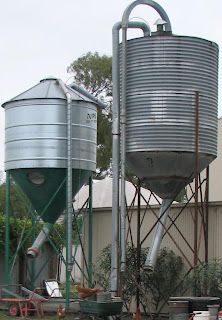 We've just installed a new silo (the one of the left of the picture).It holds 6 tonnes of chook food - the same as the older version which is due for some repair work on the top and on the cone. Once that's done it will be almost as good as new and we will probably use it for storing corn to add to the feed ration when there's not much green feed about. I'll set up an old grister (grain grinder) which has been sitting down the back of the shed for years. All that needs is for a belt pulley wheel to be attached so I can fit an electric motor. I really don't feel like hand grinding tonnes of corn!
It's something we have been thinking about for a while and it's one of those job which I have finally got around to doing.
Thw first delivery into the new silo should be tomorrow and I expect the old one to be empty by the middle of next so can start work on it. (Not easy to fix up a silo when it has a couple of tonnes of feed inside!)
The silo isn't exactly new - just new to us. It was advertised on eBay and I was the only bidder so it was just a matter of ringing the silo manufacturer and organising him to pick it up and deliver to its new home. We've had the concrete pad ready for a few years as we always intended to get a second silo.
Posted by freeranger at 11:27 AM No comments:

For those of you in Melbourne who watch television, a segment about the Freeranger Farm will feature in Mercurio's Menu at 5.30 pm - Channel 7 on Saturday March 20.
Paul Mercurio and his crew spent a couple of hours on the farm filming egg collecting and then packing them in the grading room.

They then went to Caldermeade Farm - which is one of the restaurants we supply for Paul to do some cooking.
And next month there will a piece about the farm on Talk to the Animals.
Posted by freeranger at 2:36 PM No comments:

The Sustainability Festival held at Coal Creek in Korumburra on Sunday was an interesting exercise. We spoke to quite a few people about sustainable farm practices as well as some lengthy discussions about Deep Ecology, Regenerative Agriculture, Brittle Landscapes and even riparan vegetation.
It's always great to have one-on-one discussion on these topics because there are so many misconceptions about 'sustainability'.
I'll always remember the views (expressed to me a few years ago) of a sandminer about the sustainability of his business. He genuinely believed that his business was sustainable because he would move to another site when the sand resource was finished! Unfortunately that's the view of most people in business, and probably the majority of the rest of the community. 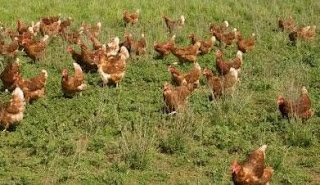 Sales of eggs weren't great on Sunday. We sold a bit of our garlic but surprisingly not a single chillie ristra. Had a number of enquiries about 'what is a chillie ristra' and of course the answer can be seen on the left. It's a bunch of chillies strung together, hanging to dry. Ours are very hot and we have a great time adding them and our garlic to the beef and lamb also grown on the farm.
The Sustainability Festival was run for the first time by South Gippsland Shire Council and it worked OK as a first event, but they will need to attract more people if it is to work long term. We like to support this type of initiative but there have to be enough patrons to make the event 'sustainable' in terms of sales. We need to at least cover our costs to make it worth the effort.
Check out some of the info on the Friends of Bass Valley Bush website and blog at http://bassbush.htmlplanet.com/
Posted by freeranger at 4:28 PM No comments:

We will be at Venus Bay Farmers' Market on Sunday for the first time. It's a special market being run because of the long weekend here in Victoria (Labour Day is Monday.)
Don't know how many eggs to take but I'm told it's been a pretty good market when run in the past.Venus Bay is about on the limit for us as far as distance is concerned - it's almost an hour from the farm and as a matter of policy that is our cut-off point.
Then next weekend we have two markets - Pakenham Farmers' Market at the Pakenham Cultural Centre for the first time. Hopefully there will be a bit of promotion and we will get a good crowd.
Then next Sunday we will be at a sustainability festival at Coal Creek Heritage Park in Korumburra. We expect that in between selling eggs and garlic, we will have time to talk about farm sustainability principles and things like Deep Ecology,  Brittle Landscapes and Regenerative Agriculture.
Posted by freeranger at 8:08 AM No comments: 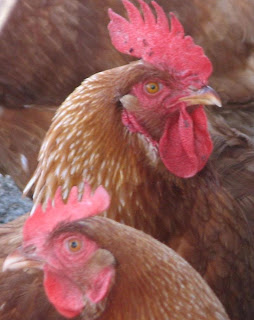 We've just discovered a rooster in our latest flock of Isa Brown pullets. They are all in full lay now with a daily production rate of  97%.
I have no idea how this little devil managed to get through to this stage. He must have been slipped through when the chicks were sexed at day old - so he survived the hatchery process and wasn't identified during rearing.
He's the only rooster on the farm with 850 hens!!!
We have been hearing some strange, muffled noises in the early mornings for a few weeks, but I thought it was coming from a neighbours property.
The rooster seems to know he is not supposed  be here - he doesn't venture out on his own, prefering to stay in the middle of the flock surounded by hens. It seems he thinks we won't recognise him in the midst of all those hens.
I think he will have to go as he is starting to become aggressive, so if I find someone who wants an Isa Brown rooster- he's theirs.
Otherwise he'll fit nicely in the roasting pan.
Posted by freeranger at 1:34 PM No comments: