The British Free Range Egg Producers Association says that the Australian Egg Corporation's plans to introduce new intensive standards﻿ for so-called 'free range' egg production will be good for them because it will show the world just how high the UK standards are.
'But I can't see how it can be good for their birds or their industry to stock birds at these levels and try to call it "free range" said John Retson, Chairman of BFREPA.
We can't see that either! The Australian Egg Corporation appears hell-bent on destroying consumer confidence in our industry. And they expect that their new standard will receive ISO certification. Dream on!
Here's a copy of the BFREPA Chair's letter published in the latest Poultry World magazine. 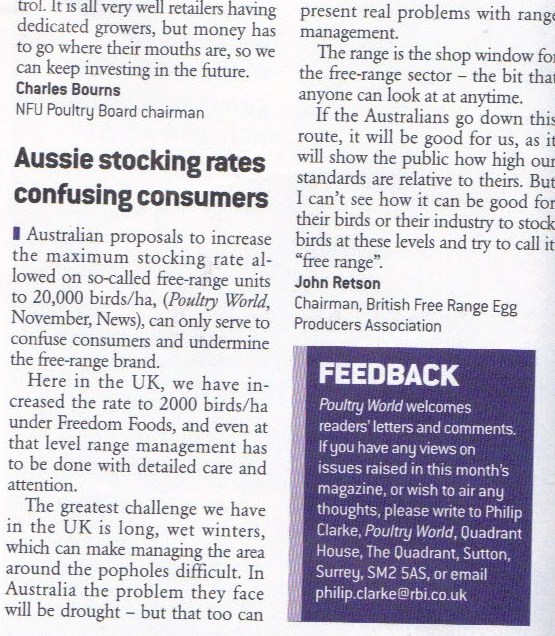 Posted by freeranger at 9:05 AM No comments:

The Australian Egg Corporation's proposed standards for 'free range' egg production have met a barrage of opposition from the industry and consumers.

The absurd proposal is more than just a question of the stocking density being raised from a maximum of 1500 birds per hectare to 10,000 – 20,000 per hectare.

Under the standards (if they are adopted) the young hens will be kept in semi-darkness within electric hot-wired sheds to prevent free roaming and to force them to lay eggs in nests on conveyor belts.

They will be locked in the sheds for the first 26 weeks of their lives to ensure they are set in their habits and are less likely to ever venture outside to forage.

As they can start laying at around 16 – 17 weeks, those eggs should certainly be called barn-laid, but they will be labelled as free range.

They will be beak trimmed at one day old or soon after, which contravenes the Model Code of Practice for the Welfare of Animals – Domestic Poultry.

If the weather is too hot, too cold, too wet or windy then the hens will be locked in the sheds because these conditions may cause extra work; for example, mud from dirty feet might clog the belt egg collection system, or having the doors open may interfere with air conditioning.

The proposed standards minimise human contact with the hens and are likely to have adverse effects on good animal husbandry practices and hen welfare.

If the factory farms do let their birds out, it will only be after the hens have finished laying – in the heat of the day. So why would a hen want to go out? They prefer the cool of the early morning and evening.

These standards are being proposed, not for the 'improvement of standards' as claimed by James Kellaway of the AECL, it is simply to facilitate the conversion of free-range egg production into a factory system.

Members of the Free Range Farmers Association Inc. have a maximum stocking density of 750 birds per hectare and beak trimming is prohibited. There is no need for de-beaking or beak trimming on a real free range farm.
Posted by freeranger at 4:51 PM No comments:

Opposition to the Egg Corporation's insane 'free range' plan comes from some strange places. NSW egg producer, Bede Burke (who is President of the Egg Group of NSW Farmers Federation) has now voiced his concerns.


Until recently his comments suggested that he fully supported the plan to allow a massive increase in stocking densities for 'free range' flocks. But at last he has recognised that the change is likely to have drastic implications for the whole industry.

In an article in The Land he said free-range hens were increasingly housed in congested sheds with minimal room to range outside.

Pressure for the industry to produce more free-range eggs, and the high costs associated with running free-range operations, had encouraged some intensive and "Mickey Mouse" operations.

He feared all farmers and retailers were at risk of being tarnished by a sales boom backlash if common sense did not prevail among opportunistic producers, and supermarket executives who were championing free-range ahead of caged eggs without acknowledging the production facts.

He said the free-range egg sales rise was a great result for his industry, but consumers should not be pressured into thinking it was the only way to ethically produce eggs.

"My hens don't die in heatwaves or cannibalise each other, or sit on eggs for days. We don't have flies, dust or parasites in our sheds; we don't need to secondary beak trim, and we have no problems getting labour to work here.

"Australia is lucky to have affluent consumers who can choose to pay extra if they don't want eggs from caged hens, but that doesn't mean alternative production methods aren't just as ethical or carbon emission friendly - or more so."

It's great to get some recognition from a major player in the industry that the Australian Egg Corporation draft 'free range' standard could damage the whole industry if it is implemented.
Posted by freeranger at 12:29 PM No comments:

Survey of egg farmers to see what they think

The Free Range Farmers Association and the national body, Free Range Egg and Poultry Association of Australia are currently surveying egg producers throughout Australia to see how many actually support the Australian Egg Corporation's plans to increase stocking densities.

Completed forms are starting to flow in from all over the country.

Undoubtedly many of the big producers will want the allowed stocking density to increase significantly, but there are many farmers (including some cage ones) who think that the proposed AECL standards are nonsense and will be a marketing disaster.

The brief survey only has two questions:
Do you believe the maximum free range stocking density should remain at 1500 birds per hectare?

If you believe permitted stocking densities should be increased what number do you suggest per hectare?

Participants are encouraged to make any additional comments.

Interestingly, Bede Burke, President of the NSW Farmers Federation egg group seems to have backed away from his support for the AECL draft standard following the Coles supermarkets announcement on pricing for its home brand 'free range' label. He said: "free-range producers expect the move will only drive down profitability, leading to free-range farms becoming intensive open-air factories.


Mr Burke said: "It looks all nice and populist for the consumer, but in reality it is encouraging cowboy operations."

"As a result, egg quality, freshness and food safety standards are being and will be compromised," Mr Burke said.

I agree totally with Bede Burke (there's a first).

When the ramifications of the AECL proposal sink in, there probably won't be too many egg producers supporting it - apart from Pace, Farm Pride, Sunny Queen etc.
Posted by freeranger at 8:41 PM No comments:

Egg Corp hatchet job on its own members

It seems that Australian Egg Corporation boss James Kellaway is going all out to destroy what little confidence consumers have in the egg industry. And he's also doing a pretty good hatchet job on his own members.

In his latest revelations about the Egg Corp's plans to allow increased stocking densities on free range farms he actually said the proposals would 'improve' industry standards.

In an article published in The Land and Queensland Country Life newspapers, Mr Kellaway revealed that some 'free range' egg producers currently have a stocking density of 50,000 birds per hectare. And he claimed that the majority of egg producers believed introducing the 20,000 cap early next year would improve industry standards, not make them worse.

"We need to moderate the whole process and take into account the science effectively clipping the wings of those producers who are currently running with inappropriate numbers” he said.

"We don’t want open slather, but we don’t want to disenfranchise producers who are being put under increasing pressure to produce eggs at lowest possible costs.”

If the Egg Corp is aware of any farms breaching the Model Code of Practice for the Welfare of Animals – Domestic Poultry, to the extent claimed (the Code stipulates a maximum stocking density of 1500 birds per hectare) we believe it has an obligation to report those farms to the ACCC and to the relevant State authorities.

It seems more likely that this is a smokescreen and the Egg Corporation is trying desperately to defend its indefensible position.

Less than a month ago Mr Kellway insulted many of his members by saying he didn't believe they could be commercially viable at current stocking densities.

And he is supposed to represent us!!!
Posted by freeranger at 7:43 PM No comments: