Farmers' Markets seem to be losing their attraction in Victoria – probably because too many are now operating. In the early days they were useful vehicles for selling farm produce, but recently buyers have been put off by seeing markets set up all over the place, often with the same stallholders.The Department of Regional Development Victoria has splashed millions of taxpayers dollars in providing seeding grants for new markets which have sprung up like topsy. Producers are rebelling against exorbitant fees charged by some market managers. As a result of declining market sales, we no longer sell at farmers' markets. Churchill Island was our last farmers' market and when we complained that the new managers at Regional Farmers Markets Pty Ltd., were less than competent and needed to learn communication and marketing skills, they had a tantrum and banished us from the market. Didn't really matter because we were only waiting until after Easter to see if there was any prospect of improvement. We work on the basis that stall fees should be no more than 10% of the value of sales at a market. At $55 per stall, Churchill Island was not viable for most of the year. Extra markets held over the holiday period at Christmas and throughout January helped to make up the shortfall in the past. But with the change in management this year, the summer markets have not attracted customers in the numbers required – because the lack of promotion meant that few people knew that the extra markets were being held.With egg production running at a lay rate of over 90%, we need consistent sales and at a $55 stall fee, supplying shops and restaurants together with farm gate sales is a more viable proposition than attending markets. 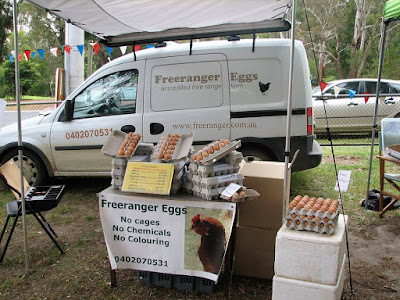