Last market in these holidays 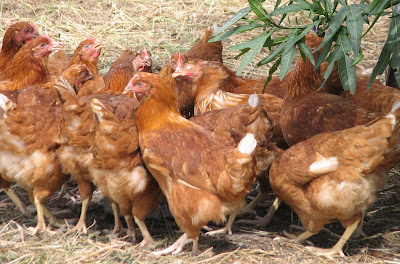 It will be interesting to see how the Farmers' Market at Churchill Island goes this Saturday (January 30). I will be in Western Australia for my brother's 70th birthday - so Anne will be on the stall. We should have at least 150 dozen eggs for the market which will take our week's sales to around 600 dozen.

The market will be last of the weekly January markets on Churchill Island to cater for the insatiable tourist demand during the holidays - then we get back to 'normal' with a market on the island on the fourth Saturday and other markets on the second Saturday and third Sunday every month.

The first of the 'new' Pakenham Farmers' Markets will be on Saturday February 13 - and we hope it works although it's not looking good as the new operators, the Rotary Club of Paknham don't seem to have their act together and haven't been in touch with stallholders with promised details.
If the first one at the new venue is a fizzer, it will be a disaster and most stallholders (and customers) simply won't go back.
Posted by freeranger at 2:13 PM No comments:

The temperature here got to 43 degrees celcius yesterday and I spent quite a few hours going around putting bottles of ice in the chooks' water and spraying water everywhere in an effort to keep them cool.
It worked pretty well although we lost five hens through heat exhaustion.
I don't know why I should be amazed, but I always am at the different reactions henshave to summer heat. Some lay around basking in the sunshine - as though they are posing on the beach at San Tropez. Others perch in the trees and try to lose body heat by opening their wings and their beaks to pant away the unwanted heat. And then some huddle together - increasing the heat problem. That's how the five died yesterday.
If they had been on the slatted floor in one of the mobile sheds, there may have been enough airflow to keep them cool. But they chose to huddle on the ground under the sheds.
As the sheds are on skids, there was enough room for the air to flow freely around those on the outside of the 'group hug' but it obviously couldn't reach those in the middle which probably ended up suffering temperatures of over 50 degrees C.
Posted by freeranger at 4:55 PM No comments:

From February, the Cardinia Ranges Farmers' Market will be held outside the Pakenham Cultural Centre at the Lakeside housing devlopment, rather than the Pakenham Racecourse.
There have been some misgivings about the suitability of the venue but hopefully the move will revitalise the market which has been slowly dying for a couple of years.
It has been a good little market, with some loyal customers - but not enough of them. It's rather disappointing to spend five hours or so (plus travelling) on the second Saturday every month to end up taking a heap of produce back to the farm.
When it started, Cardinia Ranges Farmers' Market was magnificent but since then, many so-called Farmers' Markets have popped up and consumers are getting jaded.
The market in its new venue will be operated by Rotary and, as long as it is promoted well, patronage should improve. Hopefully the name will also change to the Pakenham Farmers' Market because of confusion when the Cardinia market is mentioned on the radio with no indication that it is in Pakenham. Another point of concern is that the organisers don't appear to be interested in accrediting the market with the Victorian Farmers' Markets Association.
If it turns into just another market where people sell anything they like even if they haven't grown it or made it themselves, we probably won't be involved for long.
Posted by freeranger at 2:36 PM No comments:

We had massive day at the Churchill Island Farmers' Market on Satuday selling over 200 dozen eggs and quite a bit of our freshly dug garlic.
The sales included over 30 packs of pullets eggs in ten packs (decimal dozens) and 24 dozen Megga Eggs (950 grams). The Megga eggs always sell out first no matter how many we take - people just love really big eggs especially when they are double and triple yolkers.
Our sales for the week totalled just over 650 dozen, including our home deliveries as well as shop and restaurant deliveries.
Collecting, grading and packing that quantity is a bit tiring for just the two of us and we couldn't keep it up for long wthout putting some automated systems in place (such as a belt egg collection system and keeping the chooks locked up until they laid their eggs) but that would defeat our purpose in having a genuine free range farm.
We'll try to have a bit of a rest when the holiday season is over at the end of January - but things never seem to settle back down to the previous level once new customers taste our eggs. We know we will get a constant stream of enquiries from holiday customers who live in Melbourne wanting to know where they can buy our eggs - and the answer is ... they can't - unless they come down here!
Posted by freeranger at 7:57 AM No comments: