Proposed changes to Victoria's planning laws will mean that permits will not be required for back-yard egg producers with up to 200 chickens and hobby farmers with less than 450 hens. The new planning reforms seem to suggest that genuine egg farmers aiming to make a living will now have to obtain permits for an activity that was regarded by most planning officers as an 'as of right' use on land in a farming zone. The announcement overturns a decision by Ministers for Consumer Affairs to allow intensive stocking densities on free range farms of up to 10,000 hens per hectare. Under the new permit conditions, the limit will be a maximum of 450 hens.Full details about the changes Victoria's Planning for Sustainable Animal Industries can be found on the Freeranger Club's downloads page of the freeranger website.Politicians did the egg industry no favours by caving in to pressure from big businesses and allowing farms with outdoor stocking densities of 10,000 hens per hectare to be classified as 'free range. New Animal Welfare Standards and Guidelines for Poultry are being prepared by Animal Health Australia. They could conflict with the decision by Ministers for consumer affairs on densities. This could lead to intervention by the Federal Court. In addition to welfare issues. there are planning problems with the political stocking density decision. In Victoria regulations define Intensive animal husbandry:" as “Land used to keep or breed farm animals, including birds, by importing most food from outside the enclosures. Which means that such properties will be treated as Lot feeding operations and permits are likely to be refused. The proposed changes to planning laws in Victoria go even further and new permits will impose a maximum of 450 hens per property.
Posted by freeranger at 2:26 PM No comments:

free range farms are not an avian flu risk

Genuine low-density free range farms do not increase the risk of outbreaks of avian influenza. A leading poultry vet has said that the two most recent outbreaks in Australia were on intensive farms with high stocking densities. In an article by Dr George Arzey in the January Poultry Digest,he said that the two outbreaks in New South Wales in 2012 and 2013 were in intensive 'free range' flocks of 50,000 hens and 160,000. “The transformation of avian influenza viruses to highly pathogenic viruses is more likely in large flocks,” he said.In earlier published work he said "It is apparent from studies that differences in the disease profile of hens in different housing systems may be encountered and that viral respiratory diseases are less likely to be encountered in small free range flocks than in intensive flocks. 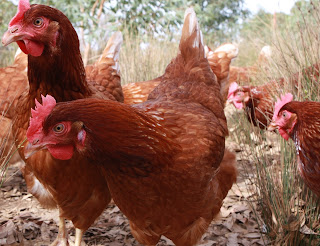 Posted by freeranger at 4:13 PM No comments:

Eggs in Australia could be contaminated

Contamination of eggs in europe with insecticide residues has led to concerns that similar contamination could be happening in Australia. Fipronil is an insecticide which is commonly used as an active ingredient for flea, mite and other pest control. Based on Australia New Zealand Food Standards Code,this country allows a Residue Limit (MRL) of 0.02mg per kg.
Posted by freeranger at 11:10 AM No comments:

More egg producers to be prosecuted?

The judgement by Federal Court Justice J Siopis in the case of WA egg business,Snowdale Holdings over deceptive conduct in labelling eggs as free range, could open up many more major egg producers to prosecution, despite ridiculous amendments to consumer law approved by Ministers for Consumer Affairs. The eggs which Snowdale sold and promoted as free range eggs during the relevant period came from laying hens that were housed in four industrial sized structures which were referred to during the proceedings as “barns” or “sheds” Snhowdale was fined $750,000 and ordered to pay $300,000 costs. In his judgement, Justice Siopis said:”In my view, the class of consumers to whom the representations on the cartons, website and poster were addressed were purchasers and potential purchasers of eggs from retail stores and supermarkets. I find that the members of that class would include a significant number of persons who were concerned about the welfare of laying hens and the conditions in which they were kept, and who would be motivated by that concern to seek out eggs labelled as “free range eggs” and would be prepared to pay more to buy those eggs. I also find the following to be the relevant context in which the impugned conduct is to be considered. The Snowdale egg cartons with the impugned labels are placed on the shelves in a store or supermarket in a manner visible to consumers. The statement on the Snowdale egg carton labels that the eggs are “free range eggs” is there to differentiate those eggs from the other categories of eggs which are also available for sale to consumers. These categories would include eggs laid by uncaged hens and sold as “cage free” or as “barn laid”. This differentiation between the categories of eggs also finds expression in the premium price that is charged by retailers for free range eggs. Contrary to Snowdale’s submissions, I find that, in that context, an ordinary or reasonable consumer would have regard to the term “free range eggs” on the egg cartons, when making a decision whether to purchase eggs labelled as “free range eggs”, rather than the other available categories of eggs.” He went on to say “The label chosen by Snowdale for the Swan Valley Egg Co carton (Annexure 2), also, reflects a hen roaming freely in a spacious and benign outdoors environment. There is on that label the picture of a single hen roaming in a spacious and luxuriant green field stretching all the way to the horizon, with no other object in sight. 199. There is no suggestion in the images and get up used on any of the Snowdale egg carton labels that the laying hens are, in fact, housed in steel industrial style sheds about 100 m long and that the hens in those sheds would have to compete with another 12,000 or 17,000 other hens, as the case may be, before the hen could even exit the shed to enter an open range.”
Posted by freeranger at 11:52 AM No comments:

Avian Influenza still a big issue around the world

Animal health authorities in the Philippines believe that highly pathogenic avian influenza (HPAI) in poultry has been brought under control. There have been high-level discussions with the poultry industry in South Africa on how to tackle the worsening disease situation there. Veterinary agencies have also confirmed new outbreaks of highly pathogenic avian influenza in commercial poultry in France, Germany, Hungary, Italy, Poland, Spain and the UK. Our relative isolation in Australia reduces the likelihood of infections here, but with approval for high density free range poultry farms, politicians have created a time bomb if an outbreak does occur.
Posted by freeranger at 10:41 AM No comments: