Rather than print hundreds of pages for visitors to take away on our Open Day on Sunday October 13, all Fact Sheets are available on our website as downloadable PDF's

They can be accessed at: http://www.freeranger.com.au/fact-sheet-downloads.html

This is in keeping with the farm's environmental policy to limit unnecessary waste. We haven't quite achieved a paperless office - but we are getting pretty close. 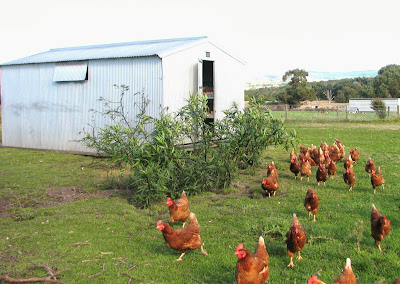 Posted by freeranger at 6:54 AM No comments:

It's often hard to understand where people are coming from. It seems that the faceless individuals currently running the Free Range Farmers Association don't like some of the things I have been saying.
Well tough!!
I have stated very openly that I and the farm operated with Anne are no longer members of FRFA because the committee refused to uphold the standards of the Association.
In press coverage I do not claim to represent FRFA or the national association. I tell journalists that I am the immediate Past President of the national body.
What more can I do? I can't help it if the reporters want to obtain factual information from me rather than mindless nonsense from the newly appointed FRFA President or Secretary.
There is nothing on the FRFA website to show members (or anyone else) who are on the committee. But from aggressive and negative letters which have been sent out, it seems that Dianne Moore is currently the President, and Jessica Luketic is the secreatary. WHY HAVEN'T MEMBERS BEEN INFORMED?

Posted by freeranger at 8:51 PM No comments:

ABC Radio in Victoria ran this today in its rural news programmes.  It was a follow up piece to the news that the ACCC has asked for major egg farms to supply details of their trading actions which may have been anti-competetive.

Posted by freeranger at 7:54 PM No comments:

It is surprising that the RSPCA has an accreditation program which it appears may not meet consumer expectations.
Have a look at video footage on http://freerangefraud.com/free-range-fraud/ and see for yourself why consumer faith has been shaken yet again in accreditation systems. Why should consumers trust any labels! This is only the latest in a line of revelations which indicate that accreditation standards are less than adequate. However, RSPCA says that it has visited the farm in question since it viewed the footage and saw nothing like the scenes depicted in the video.

Posted by freeranger at 6:50 PM No comments:

There has been quite a public backlash to the Queensland Government decision to cave in to pressure from big business and the Australian Egg Corporation and allow an increase in stocking densities on free range egg farms.
For 10 years, Queensland has been the only State in Australia with regulations limiting stocking densities to 1500 hens per hectare - in line with the Model Code. The industry there has coped very sucessfully so it is rather bizare that at a time when the Model Code is under review that the Government suddenly made a unilateral decision and took a backward step.
Here are some details from the Weekly Times.
http://www.weeklytimesnow.com.au/article/2013/09/01/581464_business-news.html
Posted by freeranger at 7:22 AM No comments: