At freeranger eggs, we choose Isa Brown hens because they are ideal for free range production. They are docile and are prolific layers of brown-shelled eggs. They tend to lay all year, but production does drop during winter when there are less daylight hours. Some farmers install lights in the sheds to trick the hens into laying more – but we prefer the natural approach and let the hens have a rest as nature intended. Mostly an Isa Brown will lay between 300 and 350 eggs each year.

They are hybrid(mixed breed) birds which originated in France but do very well in Australian conditions. They generally start laying at 18 - 20 weeks old and lay for a year before going into a moult. They come back into lay after a rest of about a month. 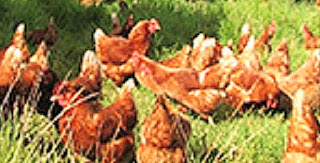 Posted by freeranger at 11:51 AM No comments:

ACCC action over milk - there may be more over eggs

It's great that the Australian Competition and Consumer Commission is taking Murray Goulburn to court for 'unconsionable conduct' in misleading dairy farmers over milk prices. Dairy farmers have been placed in an impossible position which has led to many being forced out of business. Politicians and bureaucrats have had a hand in this too. For years, dairy farmers have been told to 'Get Big or Get Out' so they have purchased adjoining farms and bought more cows to increase milk volumes for the factories. A similar issue is happening for egg farmers. Family egg farms may be forced to the wall by a political decision to allow intensive industrial producers to label eggs as 'free range. A decision has been made by all state and Federal Ministers for Consumer affairs to permit large-scale corporate producers running 10,000 hens per hectare to label the eggs they produce as 'free range'.
Posted by freeranger at 6:38 PM No comments:

The cold, wet weather here has caused a big drop in egg production at the farm. Clearly the chooks don't like the conditions. It means that we will have difficulty meeting our regular orders until production picks up again - but that's the lot of any free range egg farms if they are doing things properly. Makes it clear why so many keep their chooks locked up in climate controlled sheds. 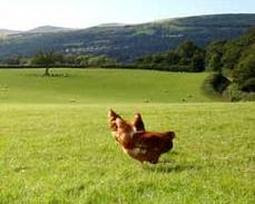 Posted by freeranger at 11:27 AM No comments:

Which came first - the chicken or the egg?

The answer to the age-old question about which came first is here: Science has spoken: the egg came first. The modern chicken is a domesticated descendant of the “Red Jungle fowl,” a bird native to the Himalayan foothills. Genetic experts have recently determined though, that there’s a bit of “Grey Jungle fowl” DNA mixed in as well, which accounts for the yellow legs found on the common chicken but not the Red J. Somewhere around 10,000 years ago, therefore – likely in a village or temporary camp in the vicinity of modern-day Thailand – the crossing of a wild Grey rooster with a tame Red hen (or vice versa) produced an egg from which emerged the first modern chicken. So unless the geneticists change their minds, it’s settled. Ten millennia later, this chick’s descendants have a reasonable claim to be the world’s most populous bird. Counting beaks in 2010, the UN’s Food and Agricultural Organisation found 19.5 billion chickens, producing 1.1 trillion eggs annually. from the website Progressive Economy
Posted by freeranger at 7:41 AM No comments:

Labels: origin of chickens, which came first. chickens and eggs

We are in the Top 50 poultry blogs

We are proud to say that this blog is regarded as one of the world's top 50 poultry blogs. 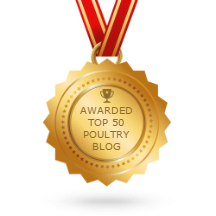 Best,
Posted by freeranger at 4:45 PM No comments:

Free range eggs in the UK were almost history

"Free-range" eggs were on the verge of disappearing from shelves in Britain as a result of the Government's bird flu housing order. Since December British-farmed poultry have been shut in barns under emergency measures to prevent the spread of avian influenza. The free range status of the hens locked in sheds was protected by UK law but by the end of February they had been inside for 12 weeks meaning that under EU laws they could no longer be sold as free range. The housing order banning birds from going outside was to be extended into March but instead the Government dropped the ban and most farms were allowsed to let their hens out. Until the change there was a real prospect that eggs previously from free range farms would have had to be re-labelled for sale as "barn eggs". There would be similar disruption here following major outbreaks of Avian Influenza. If the Government ordered all free range poultry to be locked in sheds, many of us would be forced out of business.Our hens are not beak trimmed, so if they were suddenly locked up in sheds, we would have a massive problem of cannibalism in our flocks.
Posted by freeranger at 1:41 PM No comments: