The WA Planning Commission has endorsed a decision by Swan Valley Council to order a so-called 'free range' egg producer to reduce his flock numbers to meet permit conditions. They also ordered him to pull down sheds which were built without approval. 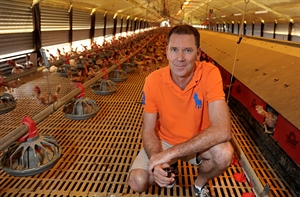 Amazing what some blokes think they can get away with! This farm was approved by the Australian Egg Corporation and was accredited to its Egg Corp Assured program - even though it breached permit conditions which are required to be checked during the audit process. Compliance with permit conditions is supposed to be a requirement of the Egg Corporation accreditation process - but this case demonstrates that as far as the Egg Corp is concerned ... anything goes until you are caught!
Here's a report:  http://www.inmycommunity.com.au/news-and-views/local-news/No-free-range-for-egg-man/7630332/
Posted by freeranger at 10:29 AM No comments:

Here's a link to a NSW blog which doesn't think much of the big boys in the egg industry.
http://megaphoneoz.com/?p=1861
Posted by freeranger at 8:12 AM No comments:

The Victorian Government is giving egg producers two extra years before they have to comply with new Australia-wide egg- stamping requirements. 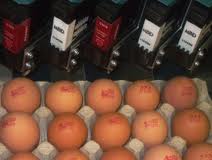 The delay has been welcomed by some egg producers but is condemned by others who saw the introduction of stamping as a good way to provide real traceability for eggs. It could help to restore confidence in an industry which has become dominated by shonky operators.

One of the arguments which some producers use is that the units cost around $30 000. But that is for sophisticated automatic ink jet systems installed on grading and packing machines. Simple 30 egg stampers are available at minimal cost to stamp a tray of eggs at a time, stampers for six at a time can be bought and individual stampers are available for very small operators.

The introduction of egg stamping will help make all eggs traceable through the supply chain - another step in eliminating egg substitution. Most egg producers support stamping - as long as it applies to everyone who sells eggs and is not just confined to those of us who do things properly! Backyarders generally have no understanding of food safety issues and are a real danger to the health of consumers. If they sell eggs, they should have to comply with the same regulations as the rest of us.

"It would give them more time to plan for and install the costly equipment needed to apply an identification stamp to every single egg, as mandated under new national food standards." Mr Walsh said.

He announced the special measure as part of the Primary Industries and Food Legislation Amendment Bill 2012 currently before Parliament.

"Whole supply chain food safety traceability of eggs from the farm to the kitchen is already provided by labels on cartons," Mr Walsh said.

"In the kitchen, a carton will provide greater traceback than rummaging in the garbage sorting through cracked egg shells." The legislation provides for the implementation of the new national egg food safety standards in Victoria.

But there is a two-year exemption from the requirement for farmers to individually stamp their property identification details on each egg shell.

"Asking farmers to purchase new eggshell-inking machines is a significant cost imposition with no proof it will improve food safety," Mr Walsh said.

There is still no indication how the actual identification mark will be determined for each farm. For example will members of the Free Range Farmers Association be allowed to use the Association logo and their farm roll number? Or will the Government allocate a number to each farm?
Posted by freeranger at 7:34 AM No comments:

The Free Range Farmers Association has posted a few videos on its You Tube channel which will help fight the Australian Egg Corporation's plans for the industry. We just hope we can get some Government ministers to take action rather than simply sit around letting major corporations continue with wth 'industry self-regulation' which does nothing positive for family farms or for consumers.

Australia's big egg producers could export rather than con consumers

Instead of disrupting the industry and trying to con consumers by culling hens to maintain higher prices and re-labelling intensively produced eggs as 'free range' why aren't Australia's major egg producers looking for marketing opportunities overseas?

Total egg exports (table eggs plus egg products in shell egg equivalents) for the first half of 2012 were 122 million dozen, with an export value of $102.7 million, up 10 and 11 percent from the same period in 2011, respectively. Both export quantity and export value set annual records.

If the Yanks can do it, why can't our 'big boys' get off the backsides and get marketing !!
Posted by freeranger at 11:06 AM 2 comments:

The Guinea Fowl which appeared at the farm a little while ago is still here,  thinking that it is part of one of our flocks!
I'm not sure this is good biosecurity for the farm, but the Guinea Fowl seems happy.
Posted by freeranger at 8:19 AM 1 comment: