Our latest flock of pullets is laying like crazy, and as we don't have a market this weekend, we will have heaps of small eggs available this Friday and Saturday.
Come to the farm at the end of Stanley Road in Grantville between 10am and noon of Friday or Saturday and you can pick up trays of pullets eggs for just $3 a tray (two and a half dozen) and trays of 50+ gram eggs for $5 a tray.
Posted by freeranger at 7:33 PM No comments:

AECL's enthusiasm on the wane

Could it be that he now accepts that the new standards are unaceptable to the community and the industry?
http://www.poultryinternational-digital.com/poultryinternational/201211_2/?folio=12#pg14
Posted by freeranger at 7:02 AM No comments:

Here's a great interview on a WA radio station with Lynn MacLaren, the Green's MLC who introduced a free range egg bill to State Parliament. James Kellaway, Managing Director of the Australan Egg Corporation makes a real goose of himself trying to defend the Egg Corp's high density proposal. He even claims that if farmers are limited to 1500 hes per hectare then free range eggs will cost up to $15 a dozen! Utter nonsense and he knows it.

The Australan Egg Corporation as well as corporate pork producers are now in serious damage control following the launch of the Animals Australia campign.

The Egg Corp has demonstrated that it doesn't care about real standards in the industry - it simply represents the interests of big business and tries to protect their corporate profits, and to hell with family farmers.

It time the Egg Corp Board started listening to us.
http://www.makeitpossible.com/

The push for 'free range' must be more than just switching labels,which the Egg Corp is trying to do with its new Egg Standards Australia.
Posted by freeranger at 7:46 AM No comments:

A day in the shed - welding

Apart from the usual egg collecting and checking on the hens, I spent most of today in  the machinery shed welding up skids for one of our mobile hen houses.

A new small flock of 200 pullets will arrive next month and I need to get everything ready for them. The nest boxes are OK but I need to do a bit of work on the hen house doors and I need a couple more feeders.

Everything will be in place by the time they arrive.
Posted by freeranger at 9:39 PM No comments:

How long do hens live in cages?

People say some pretty dumb things. And James Kellaway, Managing Director of the Australian Egg Corporation often heads the list.
In his latest tirade against the onslaught on the cage egg industry he is quoted as saying   "Each of the three main egg farming systems has welfare strengths and weaknesses. For example, hens in cages are likely to live longer, be more healthy and are safe from weather and predators."
The reality is that hens in cages live just one year before they are turned into soup, fertiliser or stock feed.

Colouring additives in most of the eggs you buy

All major egg producers and most small ones - even those which claim to be free range - use colouring additives in the feed they give their hens.
It is completely unnecessary in a free range flock, as hens running on good pasture and at low stocking densities will obtain enough carotenoids from the green feed in the paddock to maintain good yolk colour. The colour will vary – depending on what each hen has been eating – but many egg producers want to use additives to provide consistent, bright yolk colour.


Many of those additives are synthetic - adding to the chemical cocktail mix in food. But even those which are claimed to be 'natural'  can present health problems. They may be derived from natural products but they are manufactured in factories – often in China.
Three of the most widely used egg yolk pigmenters are:


Canthaxanin or Canthaxanthin which appears to be an unsafe additive. It can cause violent diarrhea, nausea, stomach cramps, dry and itchy skin, hives, and other side effects such as breathing problems; tightness in the chest; swelling of the mouth, tongue or throat; a skin rash or hives and is particularly dangerous for pregnant or breast-feeding women or people allergic to vitamin A or carotenoids.
Capsicum

Allergic reactions to capsicum may occur. People should stop eating eggs with capsicum-based colouring and seek emergency medical attention if they experience symptoms of a serious allergic reaction including difficulty breathing; closing of the throat; swelling of the lips, tongue, or face; or hives.

Other less serious side effects have also been reported such as upset stomach; migraine; heartburn; diarrhea; or burning sensation in the mouth or throat.

Use of Capsicum is not recommended for pregnant women.

Some people experience breathing problems, tightness in the chest, swelling of the mouth, tongue or throat. A skin rash or hives may occur.

The Sydney Daily Telegraph reported today that a western  Sydney egg farmer has been fined for labelling "barn laid eggs" as "free range" during a statewide crackdown on misleading labels.

Federal regulations stipulate that free-range hens must have easy access to an outdoor area to roam while barn-laid eggs are from chooks confined to a shed.

All food businesses must comply with the NSW Food Act 2003 which makes it an offence to falsely describe products.

The state government has started a statewide inspection of the industry to check eggs were correctly labelled.

The authority this year boosted its systems for tracing eggs back to the source to ensure retailers haven’t been misled.

Primary Industries Minister Katrina Hodgkinson said it was unacceptable to mislable any food product and the government will continue to protect the state’s food laws.

Over the next two years, the government will also roll out new requirements for all eggs produced in NSW to identify which farm they are from stamped on to the eggshell.

"This sends a clear message to the industry and consumers that the NSW government does not tolerate those who disobey the rules," she said.

"We have the capacity to ensure that eggs are correctly labelled in line with the national requirements and fines will he issued." Second generation egg farmer John Galea, 42, was disappointed with the decision to fine the company because the doors to Leppington barns were open and the chickens were free to "leave and go outside if they wanted to".

Mr Galea, who started working with father Paul on the eggs business when he was seven in 1977, said he would work with the authority to make sure there were bigger holes in his shed for the chickens to go outside.

"They said that’s not good enough for them so we will work with the Food Authority to make our barns suitable.

"We can’t produce enough eggs here, they sell out everyday. We mill our own grain and the eggs taste great.

"We’ve had that many dramas with the Food Authority, RSPCA and Animal Liberation, I’ll be more than happy when we can sell our land off for subdivision," he said.

"The prompt action gives consumers confidence that this is a serious deterrent to producers who think they can get away with egg substitution." Mr Burke said. Unfortunately it's not 'a tiny section' of the egg industry which is acting dishonestly.
Posted by freeranger at 7:26 AM No comments:

Class action in US for mislabelling eggs

Fighting the big boys who con consumers is a universal problem. A class action against Australia's egg producers who deliberately deceive consumers is now on the cards. 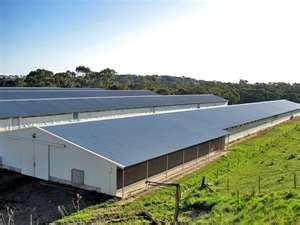 Read this at:
http://www.cornucopia.org/2012/10/animal-legal-defense-fund-sues-bay-area-egg-producers-for-false-free-range-advertising/?utm_source=rss&utm_medium=rss&utm_campaign=animal-legal-defense-fund-sues-bay-area-egg-producers-for-false-free-range-advertising
Posted by freeranger at 6:05 PM No comments:

New pullets have settled in

Our latest batch of Isa Brown pullets has settled in, and the girls like their protector, Bella the Maremma (which is just as well) ! This is a flock of 350, or 340 now as we sold 10 to the Rhyll Trout Farm on Phillip Island.

We often sell off a few of point of lay pullets as long as we have enough for our own egg production. The plan is that this flock will start laying in a couple of weeks and will quickly get into full production to help meet demand. Then in November, a flock of 200 will arrive and hopefully we will be able to cope with demand over the December/January holiday period.

It's probably a forlorn hope, as demand always outstrips supply - especially if really hot weather kicks in early.
Posted by freeranger at 6:01 PM No comments: