On June 27, the Victorian Government announced new animal industries planning reforms to improve the regulation of animal industries, environmental protection and community amenity. The reforms come into operation in September 2018 and give certainty to small-scale, low density egg farmers. The new planning rules may help to limit unfair competition from intensive enterprises claiming that their eggs are free range and should assist the ACCC in legal proceedings against intensive producers. We are still hoping that our crowd funding appeal suceeds and allows us to develop webinars to encourage the establishment of more free range farms.
Posted by freeranger at 11:21 AM No comments:

We will run our first webinar on setting up a free range farm on World Egg Day next year – Friday October 11, assuming our crowd funding appeal is a success. World Egg Day, celebrated on the second Friday in October, was founded by the International Egg Commission in Vienna in 1996. The idea behind the day was raising awareness across the world, of the important place eggs have in human nutrition. The crowd funding appeal is at https://www.gofundme.com/2tar52c The webinars will be free for participants and everyone who registers will receive a copy of our eBook on setting up a farm.Free range egg production can be sustainable and ideal as a stand-alone business venture or to enhance income on an existing enterprise.
Posted by freeranger at 10:25 AM No comments:

The Federal Government is at it again with ludicrous legislation which does nothing to help consumers and imposes on small businesses.New country of origin food labelling requirements will become mandatory on 1 July 2018. Under the new system the Federal Government flagged in 2016, it is mandatory for most food grown, produced or made in Australia to carry a familiar kangaroo symbol and a bar chart with accompanying text that shows the proportion of Australian ingredients. It will add to the already overcrowded labels on cartons of eggs, with meaningless requirements imposed by politicians.The stupidity includes: We are the only fresh food producers forced to print nutrition panels on cartons even though the concept of the panels was to allow consumers to differentiate between the food values of similar products - such as various breakfast cereals, confectionery or drinks.Meat fish and vegetable producers don't have the burden oflabelling on their products - even though they clearly have differing nutritional values. All egg producers print the same nutrition panels on cartons so consumers are provided with no meaningful nutritional information on which to base purchase decisions. Anyway most of the panels use such fine print that they are illegible.Our labels already carry the words 'Product of Australia.' We are a small farming business and our labels are just black and white so why do the mongrels want us to print in colour? It's another example of kicking legitimate businesses who meet expected standards. Unregistered egg producers, operating in the cash economy meet no requirements as they are exempt from food safety and all other standards.Politicians are doing everything they can to drive small family farmers out of business. They are only interested in corporate giants who sell eggs in supermarkets.

Our response to the polticians is to say 'enough is enough'. If the Government demands that we print new labels - they can bloody well pay the printer! Time for a revolution.
Posted by freeranger at 11:04 AM No comments:

Egg production in Australia and throughout the world has increased in recent decades, and has reached an annual volume of 68 million tons worldwide. Australian production has hit 460 million dozen. The main reasons are that chicken eggs are a valuable source of protein and are also inexpensive.The huge demand for eggs has led to more intensive production, replacing traditional free range methods. This has resulted in serious environmental impacts. Those impacts will almost certainly increase with a high density outdoor stocking rate of 10,000 hens per hectare approved by Australian Ministers for Consumer Affairs. We need to encourage people to set up more small-scale free range farms to service their local areas to meet demand rather than concentrate on the corporate solution. Currently, about 7 million tons of eggs are produced each year in the European Union. Spain is one of the largest producers with 1,260 farms and an average of 67,700 chickens each. Together with France, Spain represents about 25 percent of European production, according to the Ministry of Agriculture, Fisheries, Food and Environment. In addition, the production of eggs, like other intensive produce, generates negative effects on the environment, including the emission of greenhouse gases or the contamination of soil and water. It was not until the 1980s that intensive livestock farming began to be considered an environmental problem, and since then, few studies have focused on the impact of laying hen farms on the ecosystem. To determine the environmental implications of egg production in Europe, a team of Spanish researchers has taken as model an intensive poultry farm located in Asturias, with 55,000 laying hens and an annual production of more than 13 million eggs. The results are published in theJournal of Cleaner Production. Read more at https://phys.org/news/2018-04-environmental-footprint-egg-industry.html#jCp
Posted by freeranger at 11:16 AM No comments:

Free range farming – good for the planet and consumers

Starting a free range egg farm can be a rewarding business – as added income for an existing venture or as a stand-alone business. Low density production results in more sustainable production and climate benefits in the form of carbon sequestration. 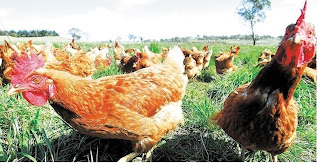 Political changes to the definition of ‘free range’ have put the spotlight on free range production and has increased demand for genuine free range eggs. But where do people start? A series of webinars on establishing small free range farms is being developed by Victorian free range farmers Anne and Phil Westwood of Freeranger Eggs, at Grantville near Phillip Island. The couple believe that encouraging new small-scale start up farms is a better option for the industry and consumers than trashing regulations to allow intensive production systems to label eggs as free range.The fundamental problem with an intensive stocking density is the unsustainably high nutrient load as each hen produces half a cubic metre of manure a year. At a density of 10,000 hens per hectare, that's 5000 cubic metres of manure on each hectare of land - posing a health risk as well as environmental damage. Sustainable production using regenerative farming methods is a far better option. The webinars will help participants understand the variety of regulations including food safety and Australia's crazy labelling requirements. Anyone who wants to encourage more people to set up genuine free range egg farms can support a Crowd Funding appeal to develop a series of on-line webinars. These will encourage more traditional free range egg farms to be established throughout the country. Freeranger Eggs is getting more requests about running workshops from people wanting to enter the free range industry. The extra activity has been brought on by the political decision to allow consumers to be misled by industrial-scale egg producers who are now legally allowed to label their eggs as free range. The Crowd funding appeal is at: https://www.gofundme.com/2tar52c More details about our farm can be found on the farm website here
Posted by freeranger at 2:50 PM No comments: