There's been some research in the UK (paid for by McDonalds) which says that tree cover in paddocks is beneficial for free range hens.

Well bless me! I've known that for around 50 years and I reckon that knowledge has been around for 'a while' before that.

But of course no-one takes any notice until there's a research paper by academics which someone has paid for!

What a load of cobblers. Anyway the link is :
http://www.ufaw.org.uk/documents/BRIGHT.pdf

Posted by freeranger at 5:14 PM No comments: 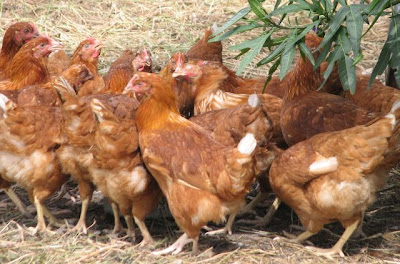 Our new flock of 300 Isa Browns is just starting to lay. Seven eggs yesterday so they should soon be up to speed.
It means that we will have pullets eggs for the Churchill Island Farmers' Market this Saturday..
Lexie is the Maremma charged with looking after them and she is doing a top job.
I've had to rig up a light in the shed which I turn on just before dusk so all the chooks can see to perch - then when they have all settled, it can be turned off.  Some flocks need a bit of light to see what they are supposed to do - but some happily jump in the sheds in the late afternoon and find their own perch. It largely depends on the time of year. Extended evening daylight gives them plenty of time, but we need to give the youngesters a bit of help at this time of year.
Posted by freeranger at 6:47 AM No comments:

Our new Freeranger Eggs website is now live at www.freeranger.com.au  I spent a couple of months getting things organised and I revamped the website of the Free Range Farmers Association at the same time.
Have a look at www.freerangefarmers.com.au and tell me what you think.

Posted by freeranger at 7:07 PM No comments:

Yesterday was a bad day. We had to euthanase Chicca, our Breton Pyrenean Mastiff. Medication was changed a couple of times, and although there were improvements, the relapses were devastating.
Rather than a skin infection and a urinary tract infection, which was the original veterinary diagnosis, the underlying problem was an aggressive mammary cancer.
Rather than put her through more pain, we had to make the ultimate decision.
Our chooks have lost two of their protectors, and we've lost a couple of friends! Chicca was believed to be the only working Breton Pyrenean Mastiff in Australia - all the others here are show dogs.﻿﻿
Posted by freeranger at 7:08 PM No comments:


THE NSW Greens will introduce legislation into the NSW Parliament this week to create a labelling scheme for caged, barn and free range eggs.

Egg producers will be allowed to label their cartons free range only if there is no more than 750 laying fowl per hectare. Water, shade and shelter must also be provided and beak trimming is prohibited under the Truth in Labelling (Free-Range Eggs) Bill.

Eggs that are not free range or barn must be labelled as cage eggs. The use of advertising or packaging that suggests the laying fowl are not kept in cages would be prohibited.

Corporations would face fines of up to $55,000. Individuals could receive six months’ jail and a $5500 fine.

The Greens MP John Kaye said people were being ripped off by unscrupulous caged egg producers, and legitimate free range producers were unable to compete. He said the absence of legislated definitions and enforceable penalties for false labelling meant in some cases free range "is nothing more than a marketing exercise to boost sales and prices".

The ACT and Tasmania have passed legislation to regulate the production and labelling of eggs.

The industry body, the Australian Egg Corporation, said the cap on stocking densities in the draft bill is "unsustainable and unrealistic".

AECL, dominated by Australia’s three largest egg producers, says it will lobby NSW MPs to vote against the bill.
With the Egg Corporation lobbying hard against it, the Bill will have an uphill battle. Hopefully thee will be a groundswell of support to let the MP's realise that the provisions in the Bill are very sustainable and realistic.
Many commercial free range egg farms are operating with those standards already in place all over Australia. Members of associations affiliated with the Free Range Egg and Poultry Association of Australia  meet those requirements which are recognised by consumers as satisfying their 'free range' expectations.
The Australian Egg Corporation of course wants a plan which allows intensive farming operations to be classified as 'free range' and allow up to 20,000 chickens per hectare and the beak trimming of birds to be accepted as 'normal'.
Posted by freeranger at 10:43 PM 1 comment: