The Egg Corp still says it is determined to push ahead with its insane stocking density standard for free range production, even though it is against the interests of the free range sector of the industry - and as it is designed to have the impact of driving down prices, it will also affect the botom lines of the cage egg boys. One day they might wake up that once the price of eggs labelled as free range drops - so will the price of cage eggs !

TheTruth in Labelling (Free Range Eggs) Bill is likely to go to the NSW Lower House of Parliament sometime in November. The Egg Corp says that the Liberal Government won't support it - so it is likely to fail.

The Free Range Egg & Poultry Association of Australia has written to the Premier, Barry O'Farrell  and various other Ministers, asking them to support the Bill and we have also written to the NSW Farmers Association asking for their help in protecting family farms from the onslaught of big business.
Posted by freeranger at 7:21 PM No comments:

Pansy reckons that 'her' new calf Daphne is just the best.  It's sad that most dairy cows don't get to raise calves, because in our experience they make tremendous mothers and they protect them from anything. We are still getting around six litres of creamy Jersey milk every day - even after Daphne has had her fill ! I'll be picking up another seperator tomorrow, but I'll also have a go at making clotted cream. We have enough cheese and butter already to last us for a while.
Posted by freeranger at 2:22 PM No comments:

Historic vote coming up in NSW to define 'free range'

It now looks almost certain that the 'Truth in Labelling - Free Range Eggs Bill' will pass the NSW Upper House this week.
http://www.smh.com.au/environment/animals/parties-unite-on-freerange-eggs-bill-20111018-1lypc.html

We don't want to count our chickens ..... because the Egg Corporation is a powerful lobby group which will use its clout to bully the lower house politicians in a last ditch effort to dump any outside control over the big business sector which it represents.

Posted by freeranger at 6:51 AM No comments:

Great use for eggs - pasta

﻿
Home made pasta is a great use for our free range eggs. It doesn't take a great deal of time, but it tastes fantastic compared with the dried suff you buy in packets. It can be dropped straight into boiling water if you want a meal straight away, or hang it on a rack to dry for a meal tomorrow - or whenever. The pasts machine makes life a little easier, but it's pretty simple just to use a rolling pin and work the dough until it's the right consistency before cutting it into strips 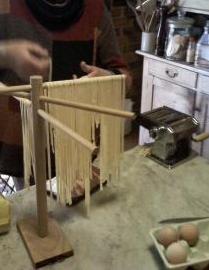 Posted by freeranger at 9:45 PM No comments:

Chook farming - the way it was

I came across these two old short films about egg farming, posted on YouTube. An interesting look at
'the good old days' ?

Truth in Labelling aired on ABC's 7.30 in New South Wales

The ABC's 7.30 program ran an excellent report on Friday night of the scam being organised by the Australian Egg Corporation.  If you missed it (or you aren't in New South Wales) here's the link:
http://www.abc.net.au/news/2011-10-07/truth-in-labelling-bill-ruffles-feathers/3352920

It took a while to put it all together but the timing is tremendous as the Egg Corp's industry workshops start this Wednesday in Melbourne. Many producers are determined to stop the AECL from undermining the industry and destroying consumer confidence.
Posted by freeranger at 7:19 PM No comments: 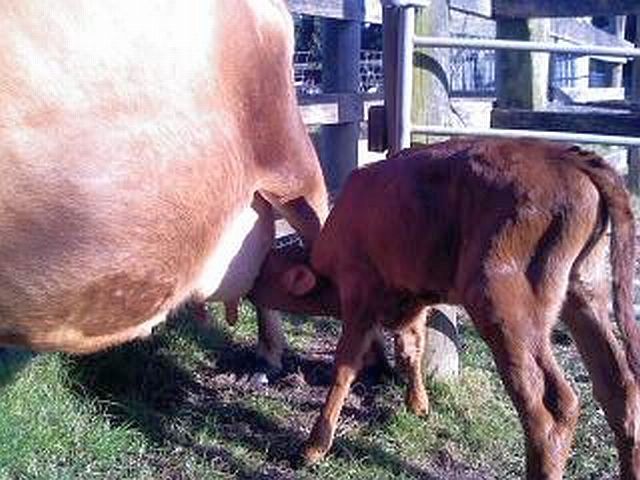 We had a new calf delivered today - so I don't have to milk Pansy twice a day! She's a real cutie (a Jersey cross) and Pansy thinks she's great. Unfortunately so does the old mare in the front paddock who wants to steal her.
I took a photo of her first session at the milk bar.
Posted by freeranger at 8:49 PM No comments:

Three dogs and a goat

The clocks went on to summer time today, so it was a slow start this morning as everyone tried to get used to the clocks going forward an hour.
As it was a very sunny day, the dogs made the most of it - basking in the sunshine just about all day, and they were joing by Baz the goat who thought that just lounging around was a great idea.
Pansy, the Jersey cow wasn't so impressed!!
Posted by freeranger at 6:31 PM No comments:

It seems unbelieveable, but the Australian Egg Corporation has accredited three farms in New South Wales with outdoor stocking densities of 50,000 hens per hectare, even though the Model Code (to which accredited farms are supposed to adhere) suggests a stocking density of 1500 birds per hectare.
More details on the Free Range Farmers Association website: