The argument for a national definition of 'free range'

There is now a broad agreement in the Australian egg industry that clear, legal definitions need to be established for different methods of production.

A national definition for free range egg production is firmly on the agenda and submissions are being made to the Federal Government to implement a standard.

The Free Range Farmers Association in Victoria and the national industry body, Free Range Egg and Poultry Association of Australia have been pushing for many years that a national definition should be established for free range production systems which meets consumer expectations.

These arguments have been boosted by the Australian Egg Corporation's managing director, James Kellaway, who has called for the definitions of egg-production processes to be enshrined in law. He said: “We have definitions that are enforced by the industry but we want to make such definitions more robust and definitive … what we'd like to see is a definition that is clearly enunciated and enforced”

The Free Range Egg and Poultry Association of Australia Inc. welcomes that announcement and has again written to the Minister for Agriculture, Senator Joe Ludwig, re-opening the debate for the development of a clear definition for free range egg production.

The Association has argued that the starting point should be the Model Code of Practice for the Welfare of Animals – Domestic Poultry. The definition should require a maximum outdoor stocking density of 1500 hens per hectare and prohibit the beak trimming or de-beaking of birds.

Currently, many producers who label their eggs as 'free range' run stocking densities well above the 1500 bird limit. AECL has revealed that some farms run as many as 40,000 chickens per hectare.

The Model Code requires producers to find alternative measures to combat feather pecking and cannibalism before resorting to beak trimming – but most farms (even those which claim to be free range) make no attempt to find alternatives. Their birds are beaked trimmed at day old or soon after.

The Australian Egg Corporation is currently trying to implement a new standard for a version of free range production that will allow a stocking density of up to 20,000 birds per hectare and will allow beak trimming as a matter of course.

Many successful commercial egg farms have demonstrated that beak trimming is totally unnecessary for hens on a free range farm – unless the farm is over stocked.
Posted by freeranger at 6:09 PM No comments:

We agree with the Australian Egg Corp (for a change)

James Kellaway, managing director of the Australian Egg Corporation is quoted in The Age newspaper today as saying that definitions of egg-production processes should be enshrined in law. “We have definitions that are enforced by the industry but we want to make such definitions more robust and definitive … what we'd like to see is a definition that is clearly enunciated and enforced”.

That's exactly what we have been saying about the problems consumers have with the lack of a real definition of the term 'free range'.

It's great that at last the Egg Corp has come to the same realisation and hopefully they will help to push the Federal Government into making a decision!

The Free Range Farmers Association and the Free Range Egg and Poultry Association of Australia have been trying to get the Minister for Agriculture, (currently Senator Joe Ludwig) to take a serious look at introducing a real definition for 'free range'. So far successive Ministers have ignored us - but with the Egg Corporation also pushing we just might get somewhere.
Posted by freeranger at 3:09 PM 2 comments: 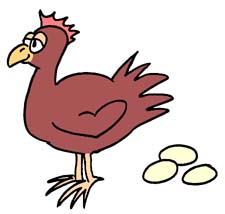 The Victorian Employers Chamber of Commerce and Industry has published this brief explanation of the proposed carbon tax in Australia: From July 1, 2012, up to 500 of the top carbon emitting companies will be charged $23 for every tonne of carbon they produce. This will cover up to 60 per cent of Australia’s pollution. This initial cost structure will run for three years, rising by 2.5 per cent a year in real terms, assuming annual inflation of 2.5 per cent (2013/14 ‐ $24.15, 2014/15 ‐ $25.40).


A full emissions trading scheme will then be implemented, allowing the market to set the carbon price.
Allowances and assistance will be made for a number of industries, particularly those heavy on industrial activities such as steel, aluminium, cement and zinc producers, and some manufacturers. A carbon price will not apply to fuel for off‐road and on‐road light transport used by the agriculture, forestry and fisheries industries. Households and small business will also be exempt from a carbon price on fuel.
The Government has committed to boosting its 2050 emissions reduction target from 60 percent to 80 percent. It is also targeting a reduction of between 5 and 25 per cent by 2020 (depending on the level of international action).
Taxing these top 500 companies does have implications for small businesses. An increased price for products and services because of the cost of the carbon tax will be passed on.
As a small agricultural business, we won't be directly subject to the tax, but we will obviously pay through increased electricity prices etc. etc. etc.
We still have not heard from the Government how our carbon positive type of production will be taken into account. Why should we be slugged just as hard as any other business which has taken no steps to reduce its carbon footprint?
Posted by freeranger at 1:47 PM No comments:

Great day for a new lamb! 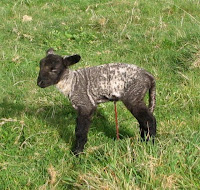 Our first Suffolk lamb for the season was born today - and what a great day it was. Sun and no wind. Tonight is cold but at least there's no rain and no wind!
The little ewe was standing a drinking within half an hour being born, under the watchful eyes of Manola the Maremma whose task it is to look after the sheep.
We have just bought an understudy for Manola - six month old Tora who is getting used to the farm and bonding with our Suffolk/Dorper ram lamb

The UK's Noble Foods, which has the brand Happy Egg Company has launched an iphone 'Free Ranger' game to promote its sales.

Is this the shape of things to come?
Posted by freeranger at 8:20 AM No comments: 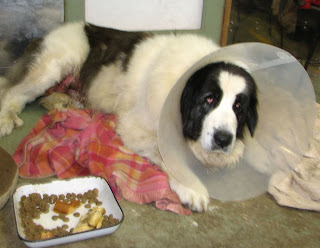 Chicca has been aggravating her skin infection by constant licking - so she is now a bucket head (as you can see).
She doesn't like it and thinks I am an evil person for restricting her like this - but we hope it will only be for a couple of weeks.
She's on anti-biotics twice a day and an anti-inflammatory tablet once or sometimes twice a day.
Posted by freeranger at 8:08 AM 4 comments:

Will the Australian carbon tax work?

The long-awaited carbon tax announcement by the Australian Government looks like a bit of a fizzer to me.
It seems pretty pointless to introduce a tax and then compensate virtually everyone for the extra costs they will face – when the purpose is supposed to be to change behaviour and reduce greenhouse gas emissions.
If no-one feels any pain, where is the incentive for people to cut down on their use of petrol, diesel, electricity and all the other pollutants which have become an automatic part of their lives.
On the farm we have reduced our carbon footprint by restricting our delivery policy to within one hour of the farm, using manual production methods (rather than collecting eggs via electricity-driven belts etc.) and maintaining native vegetation on the property.
I don't understand what benefits in terms of a reduction in carbon dioxide emissions the Australian Government expects from a tax which doesn't encourage end users to modify their behaviour.
State Governments seem to understand that the simplest and most effective way to cut down on the use of water is to double the price.
Should be the same with electricity – that will make it more cost-effective to install solar and wind plants – and fuel to cut down on the use of hydro-carbons.
Posted by freeranger at 9:04 AM No comments:

Ag Minister under fire (and he should be)

The Federal Minister for Agriculture, Senator Joe Ludwig, must be a strange bloke. His knee-jerk reaction to ban live cattle exports to Indonesia once massive publicity hit about the treatment of cattle in that country's abattoirs doesn't really sit with his complete indifference to the scams in the egg industry.
It is even worse that the blanket ban on live exports includes Elders whuch has been operating its own state-of-the-art abattoir in Indonesia for some years.  It meets all Australian standards and yet it is not allowed to send cattle there!
Whether or not the live cattle trade should be allowed at all is a separate question. There is much to be said for value-adding here in Australia and re-opening abattoirs in the Northern Territory and Northern Queensland which were forced to close once live exports took off. Interestingly advertisements have just been placed in major newspapers for staff needed at a huge new meat processing facility to be set up in Darwin
But, back to the Minister. If you can act so swiftly Senator Ludwig, why not get off your backside and do something about the eggs in Australia which are labelled as 'free range' when most of them are produced on intensive farms with hens that have been de-beaked (or beak trimmed).
Posted by freeranger at 9:38 AM No comments: