Is a polar reversal about to start?

There has been a growing scientific debate about a looming reversal of the earth's magnetic field – a flip of polarity which would switch the North and South poles.


But there's no need to worry it's not expected to start happening for a couple of decades – and it might take 1000 years to complete (but fossil remains have demonstrated that in the past, polar reversals have occurred within just a couple of years.


Magnetic reversals are triggered by Sunspot activity, the solar wind, and the interplanetary magnetic field induced primarily by the Sun.The Earth's geomagnetic field, is greatly influenced by solar effects. These include everything from disruptions in electronic or electromagnetic communications during heightened sunspot activity to minor shifts in our magnetic poles - which have been recorded at between. 8 and 10 degrees.


The effects of other planets' electromagnetic fields on the Earth are generally dismissed as insignificant in comparison to the solar effects. Major effects such as other planets causing or triggering magnetic pole reversals are not considered remotely possible. This is because  the solar wind dominates interplanetary space.


However, when the solar wind is temporarily interrupted, any planets' magnetosphere may significantly influence the electromagnetic properties of other planets.


The concept suggested is that during a near-perfect alignment of the Sun, Earth, and Jupiter -- i.e. the longitudes of Earth and Jupiter are exact, and the differences in latitude within less than one minute of arc -- the “Jupiter Wind”, responds to the temporary cessation of the dynamic pressure of the solar wind (caused by the Earth's electromagnetic “shadow” falling on Jupiter's magnetosphere) by an electromagnetic surge in the direction of the null spot of the solar wind. This so-called Jupiter Wind consists of charged particles with negatively charged electrons leading the way and leaving the larger positively charged protons behind. The charged particles, no longer constrained by the pressure of the solar wind, are essentially flung out into space in the direction of the Earth.


The alignment is a dynamic event and the solar wind quickly reasserts its dominant pressure as the Earth moves out from between the Sun and Jupiter. For this reason, the charged particles reaching the Earth initially are electrons.  The leading edge of the Jupiter Wind would effectively sweep across the earth (just as the Earth's shadow swept across the face of Jupiter), causing a negatively charged surge, which when in combination with the solar wind could cause a massive electromagnetic force against the Earth's geomagnetic field. In many respects, the Jupiter Wind could provide the trigger and “reversing mechanism” while the solar wind provides the power.


The potential for such a geomagnetic pole reversal event ispredictable by simply calculating those dates when the Sun-Earth-Jupiter alignment is sufficiently precise to cause the shadowing effect. 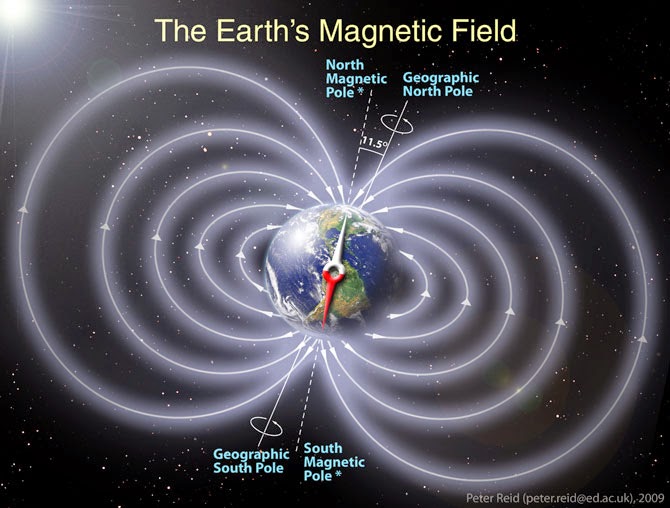 Geopalenotologists rather glibly talk of such reversals occurring every million years or so. By their own data, however, such reversals have occurred, on average, every 400,000 years, and the last such reversal was 730,000 years ago. Logic suggests that the earth is overdue for a geomagnetic pole reversal.


And here's some more from NASA:
http://www.nasa.gov/topics/earth/features/2012-poleReversal.html

Posted by freeranger at 6:51 PM No comments:

Once there is a clear national definition of the term 'free range' which brings some honesty back into the egg in dustry there will be even greater incentives for more people to set up free range farms -which is exactly what's needed to meet consumer demand. We agree totally with leading poultry industry vet Dr Peter Scott that more small-scale free range farms must be established rather than the intensive systems which are often add-ons to existing cage or barn facilities.
Moves to introduce a clear definition for free range eggs have been welcomed. State Ministers responsible for consumer affairs will consider endorsing a legal definition at their next meeting which is expected to be in April. The NSW Minister for Fair Trading Matthew Mason-Cox has been selected to prepare a draft standard.


We need a clear definition if consumer confidence is to be restored.The next step will be to get more producers involved in genuine free range production which is where our already popular eBook on  setting up a free range farm comes in - as well as the workshops we run at Grantville.


The outbreak of avian influenza at an intensive farm near Young in NSW last year demonstrated the problems which can be generated by intensive production methods - as did salmonella issues in Victoria earlier this year.


Land sustainability, food safety, animal welfare and truth in labelling  are key components of an effective free range industry and we hope that the Australian Egg Corporation will support the establishment of hundreds more free range egg farms.
Posted by freeranger at 9:33 AM No comments:

It looks like that at long last politicians in Australia are listening to the egg industry and consumers that there needs to be a national, legal definition of the term 'free range'.
We have been arguing this point for years because there are so many in the industry who have been cheating customers, and pocketing big profits.
At the next forum of State Ministers for Consumer Affairs later this year, moves will be made to establish specific regulations covering stocking densities etc.  We don't know all the details yet, but we certainly welcome the inititive and we will provide any help we can to get a realistic outcome for genuine producers and their customers.
Posted by freeranger at 1:34 PM No comments:

The South Australian Government is still to finalise its voluntary free range egg production scheme.  The sticking points appear to be establishing the accreditation and inspection processes and the costs involved for poducers.  Minister for Business Services Gail   Gago has said "there is currently no national enforceable definition of free range eggs. I have participated in national forums, ministerial council forums—most of which have now been disbanded by the current Liberal federal government—and I know that this issue has been on and off that agenda for many years. Although it has been strongly pushed and championed by South Australia—because our view has always been that the best way to proceed was through a nationally consistent approach, through a national code and national standards—unfortunately we have not been able to get other jurisdictions on board, so we failed to progress a national code.


I still believe that is the best way forward. I do not think it shows much possibility in the current climate, so South Australia is getting on with this other alternate scheme. Cabinet has approved the drafting of an industry code under the Fair Trading Act 1987, and it will require producers to meet standards, including a maximum stocking density of 1,500 layer eggs per hectare, unrestricted access to outside areas for a minimum of eight hours per day, outdoor areas to provide adequate shelter, and a prohibition on induced moulting". Minister Gago said
We still hope that a national standard will be established.
Posted by freeranger at 9:29 AM No comments: