We had six Gang Gang Cockatoos come to say hello this morning. You can't mistake their 'creaky door' call, so when I was heading up to the egg grading room I looked around to see where they were - expecting to see two. And there were six of them wheeling around in the air having a great (and noisy) time.
The dogs were not impressed but once the Gang Gangs settled down in trees for a feast they were OK. Unlike most other cockatoos, who utilise hollows in old trees, Gang Gangs like to nest in young trees.
The females use their very strong beaks to create nesting cavities in tall trees, or sometimes in trees which aren't so tall. Now and then they build a nest in a hollow they have created just a metre or two off the ground.

The loss of tree cover and feeding habitat across south-eastern Australia through land clearing for industrial, commercial and residential development has decimated Gang Gang numbers in recent years. As a result the Gang-Gang is now listed as vulnerable.
On the farm we used to see them frequently at various times of the year but now it's very occasional (hence my excitement this morning). This was only the second time I've seen them this year. It's sad to think that within our lifetime we won't have any Gang Gangs, or Powerful Owls, Lace Monitors, Potoroos, Badicoots, Giant Gippsland Earthworms - the list goes on and on. What do we think we are doing as a supposedly intelligent species?
It will probably take a few more years for some of us to realise that we are a part of 'the 'environment' not apart from it, but don't hold your breath.
A great outcome of the global economic problems which our politicians and business leaders have created would be a total re-think of priorities. But of course that won't happen - all they want is to get back on the helter-skelter of growth and to hell with anything else!
Money is the driver even though in the end - none of us can take it with us! Have a look at the 'Steady State Economy' model at http://www.bassbush.htmlplanet.com/rich_text_4.html
Unfortunately there are too many vested interests in our current system to allow it to work.
The Gang Gang or to use its 'real' name Cacatua roseicapilla has short muscular legs, and feet with two toes forward and two back, very suitable for climbing and grasping. Most prefer to nest in trees.
They usually eat seeds, but when nothing else is available many are also attracted to the fruit of trees such as apples, plums, cherries, and the seeds of hawthorn, firethorn and cotoneaster. Many eat the seeds of native and exotic conifers.
Posted by freeranger at 1:25 PM No comments: 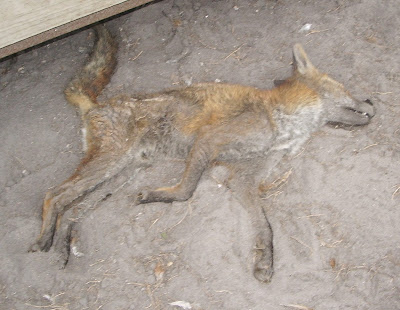 This morning there was another dead fox in Chicca's paddock, alongside the mobile hen house. This time there was no doubt who killed it because Chicca was in there on her own. Monte wouldn't go back in with the chooks last night, preferring to camp at the front door!

As you can see it was a miserable mangy specimen - but they can do a lot of damage if they get at the hens. Many of the foxes around here are badly affected by Sarcoptic Mange which is a problem for our dogs and we need to treat some of them every six months or so
Posted by freeranger at 12:23 PM No comments:

Back to the markets this week 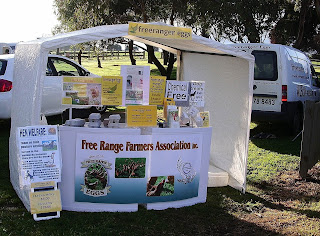 Thankfully our production has continued to build and I will be returning to the Inverloch Farmers' Market this Sunday. I probably won't have a huge number of eggs but I should have 80 dozen or so including pullets eggs.
It will mean that most of the latecomers will miss out but I expect there will be enough to keep going until 10.30 or 11am.
We are starting to get ready for the next new flock which arrives around mid June - so I'm making sure the mobile sheds are cleaned out and the nestboxes are ready.
Posted by freeranger at 7:48 AM No comments:

I don't often quote from newspapers - but this I agree with.
'Pig flu might not fly if we go organic' Alex Renton writes in Britain's The Times newspaper. "Clearly, keeping animals packed together in unnatural conditions is conducive to the breeding and mutation of viruses," he wrote. "Most food scares of recent years — dioxin contamination of Irish pork, antibiotics in Scottish salmon, salmonella in chicken, BSE and so on — come down to unnatural, intensive farming practices done on the cheap. Then there is the troubling disappearance of the honey bees, thought to have been caused by pesticide overuse.Now, I’m not saying that buying organic will save us from swine flu or bring back the bees but, clearly, if you worry about these things you should choose to eat food that has been produced in a natural way, with minimal chemicals and without cruelty to animals."The Times2 (1 May, p.12)
Posted by freeranger at 9:37 AM No comments: 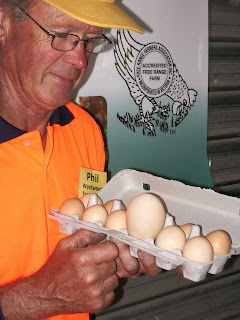 It's interesting that only one of the stores which stocks our eggs doesn't seem to understand why a small egg producer like us can't always meet their orders for eggs.
Everyone else recognises that this is a boutique market, that production volumes will vary throughout the year – and they need to either have a standing order or give us at least three days to meet their requirements prior to a delivery run.
We always do everything we can to meet orders (I hate saying NO) but it's a bit rich to ring up the day before a scheduled delivery to increase the order.
We can't pluck eggs out the air!!!
Many of our regular customers at Farmers' Markets have missed out because we haven't had enough eggs to get to the Farmers' Markets at Inverloch, Churchill Island or Pakenham.
The cold weather has delayed full production from the new flock but the number of eggs is increasing every day.
If you have a look at our website - http://freeranger.com.au it's easy to understand that we are very small players in the egg business. We will leave the mass market to others!
Posted by freeranger at 10:58 AM No comments: 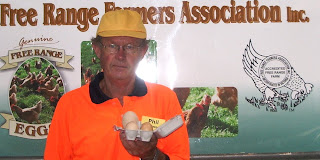 We are going through a difficult production patch at the moment. Our new flock of birds is only just starting to lay (15 eggs yesterday) and all our older girls are slowing down because of the cold weather.
As a result our egg production is down about 70 - 80 dozen a week which makes it impossible to go to any of the Farmers' Markets we normally attend.
We've had to miss the last markets at Inverloch, Churchill Island and at Pakenham which is a bit of a pain.
We don't like disappointing our market customers but we have to look after our home deliveries and the weekly orders from restaurants and stores.
We expect to be back on track soon with a weekly production level of around 400 dozen or so and then we can get back to the markets.
Posted by freeranger at 7:02 AM No comments:

New nest boxes for the pullets

I spent a couple of hours today putting together a set of ten nest boxes for the new flock of pullets who are just starting to lay.
Hopefully the nests will encourage them because they don't seem to like the communal nests in their shed!
There's a row of 20 nests along one side of the shed but so far they are only laying three or four eggs a day. At around 20 weeks old (which they are now) we normally have a lay rate of about 50% - so we've been expecting something over 100 eggs a day from them.
Posted by freeranger at 6:33 PM No comments: