The egg industry here in Australia appears to be oblivious to the threat of  the Trans Pacific Partnership which is still being negotiated. Trade Minister Andrew Robb has been holding talks in Sydney this weekend which could see the importation of cheap eggs - but our farmers don't seem to care.
The Canadian Egg Industry is more aware of the potential threat to their businesses, but here, the big players prefer to look the other way.
http://www.eggfarmers.ca/international-trade/international-trade-agreements/
Posted by freeranger at 9:16 AM No comments:

Stamping eggs with a farm identification code is part of a national food safety scheme which is being implemented differently in each State. In Victoria, the State Government delayed the compulsory introduction of egg stamping until November 25 this year. 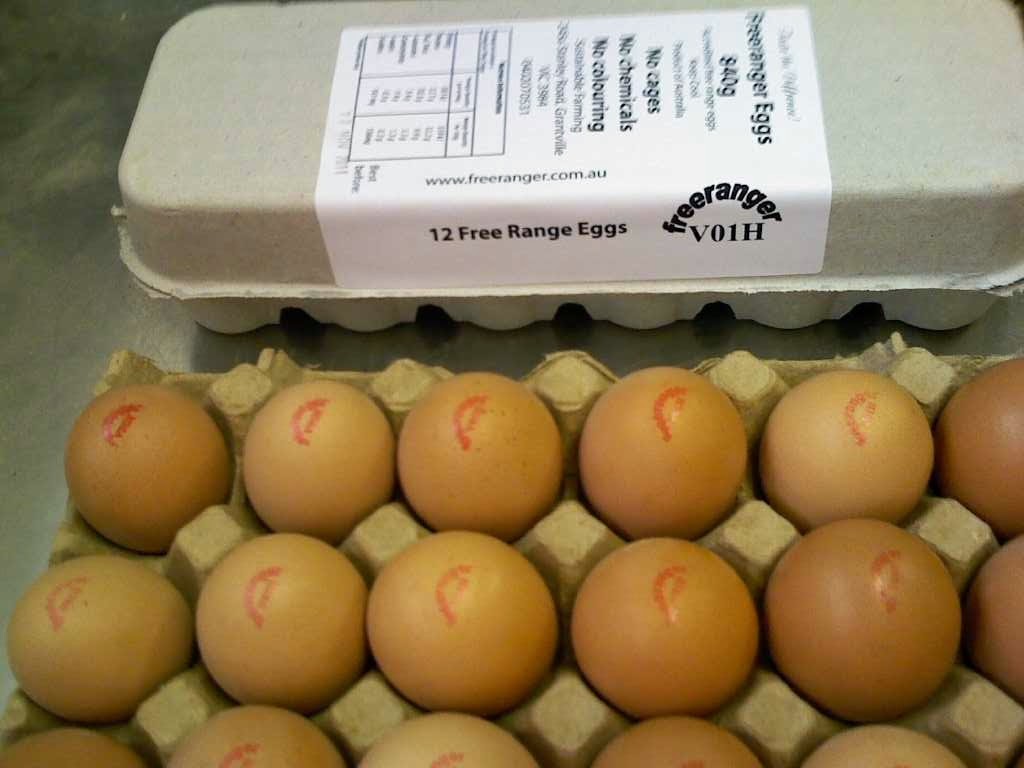 The Government says it will exempt producers with less than 50 hens from the new requirements. Some producers claim that the whole concept is a farce and will do nothing to improve food safety or traceability.


Egg stamping will help to solve the egg substitution rort which has been rife for years but probably first came to general notice in Victoria during 2007 with a high profile case when a company was fined for labelling eggs as organic when they were from conventional farms.


Also in 2012 an inspection processes in Victoria revealed that a farm was packing and selling eggs from dubious sources interstate and labelling them as free range eggs produced on that Victorian farm.


If all eggs are stamped with a unique number which shows the farm on which they were laid, egg substitution will hopefully become a thing of the past.


Consumers may still have to contend with labels which can be misleading, with pictures of hens frolicking on green pasture when the reality is far different. But a recent Federal Court decision which resulted in a $300,000 fine for a NSW egg farm which falsely labelled its eggs as free range, should give consumers a little more certainty when they buy eggs.


Accreditation means different things to different people. Consumers rightly expect it to convey a message of credibility about a particular product, but to many businesses it's simply a marketing tool designed to allow them to make claims which increase their profits.


A logo can be a valuable asset if it is trusted by consumers. But it's value is destroyed if it is shown to be meaningless. Any accreditation program is only as good as the willingness of the accreditation body to maintain its standards and defend its logo.


Unfortunately there is no free range certification standard in Australia which is worth the paper it's written on.
Posted by freeranger at 3:03 PM No comments:


Writing in Stock and Land, and various other publicatioins, SamTrethewey has tried to justify the consumer deception practised by many egg farmers who label eggs as 'free range' even though they are from intensive production systems. He argues that those producers have simply followed the Model Code. But all that shows is that he hasn't read the Model Code, because, if he had, he would see that the maximum outdoor stocking for free range egg laying hens is 1500 per hectare. There is a reference in the Appendix to 'any higher density' being allowed for meat birds as long as a rotational system is in place.
In his rant, Mr Tretherwey claims that  'the Australian Competition andConsumer Commission (ACCC)"starts throwing their weight around and penalising some farmers to satisfy some consumer complaints.


But against which standard? These farmers have been following the agreed voluntary code.


Admittedly, industry hasn’t been able to unite to form mandatory standards for production.


So the ACCC penalises against perception, but whose perception?


A recent case saw the ACCC smacking free-range egg farmers in the face because not all hens were outside.

Yes indeed, that's right Mr Trethewey, the ACCC was right to take action as  demonstrated by the farm's decision to accept an agreed penalty of $300,000. The Federal Court judgement is a great result for the industry.

Posted by freeranger at 11:28 AM No comments:

From the Northern Daily Leader, Tamworth


their industry nationally – a legal definition of free-range eggs, and egg stamping.


while egg stamping has already started to be rolled out nationally and is set to come into force in NSW on November 26, a legal definition of freerange eggs will not be decided upon for several years.


... preparing these standards is expected to take a number of years to complete”.


The consumer affairs ministers’ forum, set to meet early next year, would “not consider a draft standard next year – it would be a progress update to consider how to proceed”, the spokesman said.


The chairman of the NSW Farmers’ egg committee, Bede Burke, who lives at Winton, said any definition of free range had to ultimately help producers.


“It’s absolutely necessary, but it needs to be paralleled with how those four million (free-range) birds are currently housed,” Mr Burke said.


He said many producers had spent the past three to five years spending a lot of money changing infrastructure to comply with the existing code of practice.


If the code was changed “dramatically”, it would mean producers would have to “rethink whether to put (more)


capital in ... farmers need to re-evaluate whether they’re going to stay in the industry”, he said.


“The definition by the code of practice was very loose and that’s where we’ve got these problems,” he said.


Mr Burke said outdoor stocking density was one of the biggest issues regarding what qualified as free range.


“It’s a very emotive issue and it is an issue people don’t understand well,” he said.
comment by Freeranger Eggs:


The problem for the rest of us is that the corporate industry is able to exert great political pressure. Bede Burke has the ear of Federal Agriculture Minister Barnaby Joyce (they were at school together).

Contrary to Bede Burke's ravings, this is what AECL Managing director James Kellawsay has been telling egg farmers:
'This decision is directed to the industry practice of labelling of "free range" eggs and provides guidelines for the lawful usage of such term.

As a result, I urge you all to read the judgement carefully and take any necessary steps to ensure you comply.'
Posted by freeranger at 6:54 PM 2 comments:

Australia's egg industry is desperately trying to cover its tracks after major producers have been sprung conning consumers.


Bede Burke, Egg Committee Chairman of NSW Farmers claimed in an interview on ABC radio that there is confusion surrounding free-range and caged eggs, which is making future investment for the industry difficult.


He said it was a shock to see avian influenza outbreaks in the new style of free-range farms built in Australia. He said the magnitude of the outbreak was foreign to DPI staff, although the virus was eventually contained to two farms and eradicated. He acknowledged that the recent ACCC court case against Pirovic over free-range eggs was a defining case. But he tried to argue that farmers have invested in free-range production according to the existing code, which is now having a different interpretation laid over top of it. What a load of cobblers – it's purely greed. The existing code precludes intensive free range egg production but the shonky operators thought they had found a loophole! Bede Burke's attempts to defend shonky practices have not been supported by the Egg Corporation. Managing Director James Kellaway has told egg farmers " The judgement has some very important ramifications for free range egg farming, as it is now law. The judgement defines, to a degree, what free range egg farming is. As a result, I urge you all to read the judgement carefully and take any necessary steps to ensure you comply.
Posted by freeranger at 9:23 PM No comments:

The definition of 'free range' will be a key feature of World Egg Day in Australia. At last, thanks to the Federal Court, there is now a specific definition which will be explained at an Open Day being held at Freeranger Eggs in Grantville this Friday and again on Saturday at the Farmers' Market at the Old Cheese Factory in Berwick.
One of the details in the judgement by Justice Geoffrey Flick  when he approved a fine of $300,000 for the mislabelling of eggs by Pirovic  Enterprises is "any free-range claim must be backed by farming conditions and practices ...under which hens actually move about on an open range each day.  Here's a piece run by ABC radio in Gippsland.
http://www.abc.net.au/local/stories/2013/10/05/3863085.htm
Posted by freeranger at 1:31 PM No comments:

At last in Australia we now have a legal definition what the term 'free range' means, thank to the ACCC and the Federal Court.
Here are details which we will publishing as a poster available at the Farmers' Markets we attend.


The Federal Court found that by labelling and promoting eggs as ‘free range’, a NSW egg company Pirovic Enterprises represented to consumers that the eggs were produced by hens which were able to move about freely on an open range each day, and that most of the hens did so on most days. Pirovic admitted, most of its hens did not move about freely on an open range on most days.


The Court found that the eggs supplied by Pirovic were produced by hens, most of which did not move about on an open range because of a combination of factors:

This decision provides clear guidance that any free range egg claim must be backed by farming conditions and practices implemented by suppliers under which hens actually move about on an open range each day.


The ACCC and Pirovic agreed on joint submissions and proposed orders put to the Court. That resulted in fines of $300,000 plus costs to be paid by Pirovic for misleading consumers.


The court found that there are a number of farming conditions that impact on whether hens move freely on an open range each day. The conditions vary between producers and no single conditionis conclusive. The relevant conditions include:

Posted by freeranger at 9:37 AM No comments: