Weed could be an important protein source

A scientist says that an invasive weed could be used as a protein source for animal or human food. 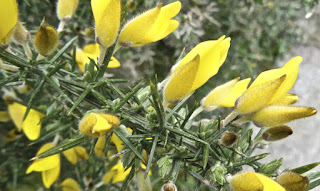 gorse bushes that have invaded many landscapes could produce enough protein to feed millions of people, according to the leader of a Scottish government research programme.

The suggestion by Prof Wendy Russell, at the University of Aberdeen, comes from research on the protein content of invasive plants that are currently sprayed with toxic herbicides or burned to keep them under control.

Gorse contains 17% protein she said “Gorse was fed to cattle at times when crops failed in the past, so we think protein from these plants could be used as animal food. If protein isolates are produced in the correct way, so to be safe, they could be considered as human food in the future.”

“The whole point about gorse is it is actively being removed from marginal lands – it’s something we can gain protein from at no extra cost,” she said. Gorse is widespread trhroughout Australia.

Posted by freeranger at 1:24 PM No comments: