I made the first batch of butter from Pansy's cream today. 1.5 litres of cream gathered from four milkings yielded 600 grams of butter.  And we will have pancakes tonight made with buttermilk. Yum!

In the past I've always used our Cherry Churn to make butter but I cheated today and used the Kenwood Chef- made a bit a mess though. I might go back to using the old churn.It needs a bit of work on one of the paddles - but that won't take long.
Posted by freeranger at 6:36 AM No comments:

New house cow to provide all our milk, cream and butter 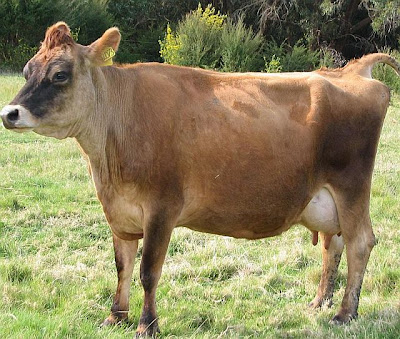 It's a few years since we had a house on the farm and I've missed making butter and cheese - as well as the taste of real milk!
But now we have Pansy, the Jersey house cow who is giving us around 8 litres a day - so we will have to get a calf to drink some of the milk !!
I'll probably make the first batch of butter tonight or tomorrow.
Posted by freeranger at 7:38 PM No comments:

Great story on the front page of SMH

It's not often that the egg industry is able to crack the front page of a major metropolitan newspaper, but we've done it this morning in the Sydney Morning Herald.
Have a look at :
http://www.smh.com.au/environment/animals/farmers-cackle-over-freerange-definition-20110914-1k9s9.html
The Australian Egg Corporation must have been dreaming if it thought it could get away with this! The proposed definition would be a total consumer deception and we are confident that the ACCC will jump on them from a great height if it is implemented.
Posted by freeranger at 7:02 AM No comments:

A UK study about the benefits of trees and shubs in the paddocks where free range hens are allowed to roam found that the problems of feather pecking and cannibalism were reduced significantly. This university study (funded by McDonalds) will help in the argument against the Egg Corporation's intensive 'free range' proposal.


Domestic chickens are descended from the red junglefowl of south-east Asia and are found in areas where there is plenty of undergrowth, and overhead cover, which provides shade, shelter and protection from aerial predators (Johnson 1963; Johnsgard 1986). Horton (2006) found that with tree cover present, a higher proportion of hens in commercial freerange flocks ranged, and ranged further, compared to hens without range tree cover; in ranges with tree cover, the maximum numbers of hens outside were 50 m from the house compared with 10 m in ranges without cover.


Hegelund et al (2005) and Zeltner and Hirt (2008) demonstrated that artificial and tree/bush cover on the range can attract more hens away from the area immediately outside the house compared to ranges without cover, and that the variety and quality of cover was more important than the absolute amount of cover. Furthermore, there is a well-established link between range use and IFP (Injurious Feather Pecking) in commercial layinghen flocks; the higher the percentage of flocks using the outdoor range, the lower the prevalence of feather pecking (Green et al 2000; Bestman & Wagenaar 2003; Nicol et al 2003; Lambton et al 2010). In an experimental study by Mahboub et al (2004), a negative correlation was found between percent of time spent outside and plumage damage .


If providing cover on the range improves the number and distribution of hens using the range, and range use is negatively correlated with IFP, it might also be expected that range cover will be correlated with IFP. To our knowledge, however, the relationship between proportion of range cover or canopy cover and IFP has yet to be examined.


The study described the first results from an ongoing collaborative project between a major UK high street restaurant chain and two UK egg-producing companies, McDonald’s Restaurants Ltd, UK (McDonald’s), The Lakes Free Range Egg Co Ltd and Noble Foods Ltd. The aim of the project was to implement animal welfare research on a commercial scale and improve the welfare of laying hens within the McDonald’s supply chain. During 2007 and early 2008, all 286 laying hen producers (approximately one third are Lakes and two-thirds are Noble), were required by McDonald’s to plant, if not present already, 5% of the total range area in trees (decided upon after consultation of existing farm assurance free-range standards, cost and practical considerations). There was a large variation in tree cover because of the proportion of the range on which producers decided to plant trees, the timing of planting prior to flock placements and the presence of existing tree stands.


The objective of this study was to investigate, in a commercial situation, the correlation between: i) proportion of range cover and ii) proportion of canopy cover, with plumage damage of end-of-lay hens.
The full report is available from Universities Federation for Animal Welfare
The Old School, Brewhouse Hill, Wheathampstead,Hertfordshire AL4 8AN, UK
or by contacting us at Freeranger Eggs
Posted by freeranger at 6:16 PM No comments:

All three are accused of claiming their chickens have been raised in spacious barns where they can roam freely, similar to free-range birds.

If the action is successful, it will send a great message to all those intensive 'free range' egg producers who are making a fortune out of gullible consumers and slack regulations.

The consumer watchdog claims chickens raised in barns cannot enjoy a free range-type lifestyle because there are so many of them.

"Promotional activities that convey an impression of farming practices are powerful representations which influence many consumer purchases and food choices," the ACCC says.
Posted by freeranger at 7:32 AM No comments:

The lightweight 'news' and magazine TV programme, Today Tonight ran a piece about US researchers claiming to demonstrate that there is no nutritional difference between free range and cage laid eggs.
Of course the study undertaken by North Carolina State University showed there was no difference. The research was funded by the egg industry and the hens used were all beak trimmed.
The 'free range' hens used in the research programme may have been allowed access to the outdoors, but as their beaks were trimmed, they essentially could only eat the same grains and food which were available to the birds in cages. They had great difficulty eating grass, or picking up worms, spiders etc without a full beak.
TV shows like this just perpetuate the myth that 'an egg is an egg'.
Have a look at:
http://au.news.yahoo.com/today-tonight/video/watch/26473133/
Posted by freeranger at 12:18 PM No comments: