We almost met the demand for our eggs last week but with the increased numbers of tourists on Phillip Island over the past couple of days, there's not much chance of us having enough eggs to satisfy all the customers until the end of January.
It was extremely busy at the Churchill Island Farmers' Market on Sunday and we sold out of eggs at about 11am but kept going with our fresh garlic for a while.
Altogether, we sold 460 dozen eggs last week and we expect to sell 480 - 500 dozen this week through our combination of outlets, including restaurants, health food shops, other stores and Farmers' Markets. The temporary increase in population means that the underlying local demand for free range eggs is now something like 1200 - 1500 dozen a week.
As always happens, that demand will be met by shonky operators who stick 'free range' labels on their cartons and flog them to an unsuspecting public.
Our new flock of Isa Browns is helping us to increase egg numbers but even when they are in full production (assuming the other hens keep laying at their current rates)  our total output will be something like 600 dozen each week.
I've just finished digging the final crop of late Californian garlic so that should see us through most of this heavy demand period. I expect all the garlic will be sold before the end of January.
Posted by freeranger at 2:11 PM No comments:

We are at the start of our tourist season with two markets this weekend. Churchill Island Farmers' Market was on Saturday and Inverloch Farmers' Market was Sunday.
Thankfully we had plenty of eggs but it was a bit of a juggle to meet our normal orders as well. From now on the restaurant trade and our shop orders build up - orders have already been doubled for next week!
The new flock of pullets has just started to lay so we expect them to be in full production in a week or so.
Unless we are hit with problems such as a couple of weeks of really hot weather, we should have enough production to meet most of the demand although we expect to be selling out of eggs at every market during January (hopefully not too early because it's a tad embarrassing to sell out before 10am!)
We won't be doing two markets each weekend as we wouldn't have a hope of having enough eggs to offer customers on Sunday if we'd been to a market the day before. This latest weekend was a one-off and it was just fortunate (or rather fantastic planning) that the chooks were able to cope.
Posted by freeranger at 4:43 PM No comments:

It's looking increasingly unlikely that anything positive will emerge from the Copenhagen talkfest on climate change.
And to make things worse, a United Nations board has decided that soya, palm oil and other agrofuel plantations can now receive carbon credits through the Clean Development Mechanism (CDM). The agrofuel industry, already boosted by EU and US targets, incentives and subsidies, can now pocket hundreds of millions of dollars in extra subsidies. Vast carbon dioxide emissions from coal power stations in Europe can now be officially ‘offset’ by companies paying for soya plantations in Brazil or palm oil plantations in Indonesia or Thailand, which in turn will cause more deforestation and other ecosystem destruction - and more climate change.


The CDM was set up under the Kyoto Protocol and allows Northern hemisphere countries to ‘offset’ greenhouse gas emissions by paying for projects in the South, instead of cutting their own emissions. There is clear evidence that most of the CDM carbon credits go towards polluting industries in the Southern hemisphere, and in future, more carbon credits will go towards monoculture plantations in the South – now including soya, palm oil and jatropha plantations for agrofuels. The new CDM rules for agrofuels state that plantations must be on ‘degraded and degrading land’. This definition is so wide that, for example, any land where vegetation is declining because of increased droughts and heat due to climate change would fall under it, also any land suffering from soil erosion or soil compaction. Yet industrial monocultures are the quickest way of degrading soils, destroying biodiversity and polluting and depleting water resources.
We will still be doing our bit on the farm to try and redress some of the problems created by our 'civilisation' but it's looking more pointless every day when decisions are made which allow polluting businesses to 'offset' their emissions rather than STOP polluting!
More details about action you can take at http://www.rainforest-rescue.org/
Posted by freeranger at 8:29 AM No comments:

New flock is out exploring 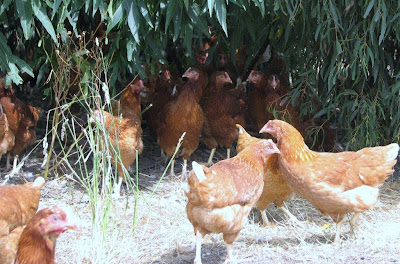 The 300 fifteen week old Isa Brown pullets in our new flock are spending their days exploring their paddock. Here are some of them under a stand of eucalypts.
There are two mobile sheds in the paddock but many of the young hens prefer to roost in the trees rather than spend their nights in one of the sheds.
Hopefully, once they start laying eggs (in two or three weeks) they will get the message that the nest boxes in the sheds are wonderful things.
The pullets quickly realised that their Maremma, Abby, is a friend and she now has an air of self-importance because for three weeks she didn't have a flock to protect.
Posted by freeranger at 7:57 AM No comments:

Paul Mercurio on the farm

Paul Mercurio, host of Channel 7's Mercurio's Menu came down to the farm during the week to video a segment on eggs for an upcoming show.
The crew spent a couple of hours on the farm filming Paul collecting eggs and then packing them in the grading room.The dogs and the chooks behaved well (and so did Mr Mercurio and the crew).
Once they had enough on tape they headed off up into the hills to take a shot of the Bass Valley and Westernport - basically to show the locality.
After finishing off our day's egg collecting, I headed off to Pakenham on a delivery run. On the way back home I delivered to one of our restaurant customers Caldermead Farm - and who should be there but Paul Mercurio and his crew.
Paul had taken over the kitchen and had been cooking away for a while.
It'll be interesting to see the show but I don't know when it will go to air.
Posted by freeranger at 4:07 PM No comments: