We hope that 2014 will demonstrate to our politicions in Canberra and all State parliaments that family farms are a greater benefit to the country and the community than the corporate giants which get all the attention.

The International Year of Family Farming aims to stimulate policies for the sustainable development of family farms, communal units, and cooperatives.
When the United Nations declared 2014 as the Year of Family Farming, it announced that family farms were important for sustainable food production to achieve food security. The Year focuses on solutions to combat poverty and hunger.
We will do everything we can to get our politicians to recognise this and we will host a number of events throughout the year.
http://www.timeanddate.com/year/2014/family-farming.html
Posted by freeranger at 8:50 AM 1 comment:

The Field Guide to Victorian Produce will make a great Christmas present - especially as the price has now been cut from $40 to $25.

The Guide makes it easy for anyone to access quality produce from their food region, or to enjoy regional food tourism by going direct to the source. The Guide also connects growers to new markets by providing a platform for them to tell their story and sell their goods. In the name of localism and authenticity this book celebrates quality regional produce, farming and a healthy life - just like us at Freeranger Eggs.

Full of great stories, recommendations by locals, beautiful illustrations, useful maps and two indexes the Guide is a valuable addition to the Victorian food sector – a much needed resource and a practical tool.

It can be ordered via the products page of the Freeranger website www.freeranger.com.au or you can pick it up at one of the Farmers' Markets we attend.


Professor Christine Nicol of Bristol University in the UK has written about the media misrepresentation of some of her work on hen welfare issues. Some news outlets here in Australia were guilty of publishing misleading information.

She says there has been a good deal of media coverage about the relative merits of enriched cage and free-range egg production.

'Some,' she says 'reached the simple conclusion that enriched cages are better for hen welfare than free range. Others have argued the opposite'.

She argues that in a comprehensive study comparing four different housing systems, hens in enriched cages had lower mortality and fewer problems relating to disease, pecking injuries and skeletal health than hens in any other system. However, in terms of bird welfare, enriched cage can never provide birds with the full freedom to perform behaviours that matter to them.

Posted by freeranger at 7:33 AM No comments:

At last the Australian Competition and Consumer Commission has taken action against a couple of big egg producers who claim that the eggs they sell are 'free range'. The industry knows that this con has been going on for years, but it became big business - worth millions - once some of the smart operators interpreted a clause in the Appendix to the Model Code of Practice for the Welfare of Animals - Domestic Poultry as allowing an unlimited stocking density on free range farms.
The Code actually limits outdoor stocking densities to 1500 hens per hectare - but the guys chasing dollars chose to interpret a clause relating to meat birds as also applying to egg laying hens. They were dreaming, but (for them) it made sense for their bottom lines. The difference of course is that stocking density for meat birds is not as relevant as they are sent off to the abattoir when they are five or six weeks old so they hardly have any time out of the sheds in which they were raised.
Keep it up ACCC !!!!
http://accc.gov.au/media-release/accc-institutes-proceedings-against-free-range-egg-producers
Posted by freeranger at 7:31 PM 1 comment:

Pakenham Gazette - On the Land 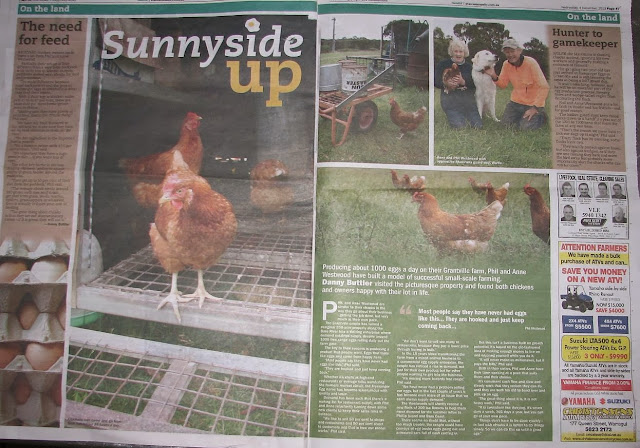 The Freeranger Eggs farm featured in this week's Pakenham Gazette in the On the Land section. This sort of article does us far more good than features in metropolitan papers - or on radio and tv - because we only sell locally.
We don't travel for hours doing the rounds of city markets as do many many of our colleagues in the egg industry.
They make a mockery of the pretence that they are selling 'local' food. I suppose they can always claim that it's local somewhere!
Posted by freeranger at 2:47 PM No comments:

Investigations into the avian influenza outbreaks near Young in New South Wales appear to confirm that the biosecurity practices on the two farms were not up to scratch – even though they were said to be 'state of the art' facilities.

It seemed odd that the initial outbreak was able to spread so quickly to cage hens on a farm which also had birds with 'access' to the outdoors – and then to a separate cage farm.

The likely cause has now been revealed by the Department of Primary Industries in NSW.

'The highly pathogenic avian influenza (HPAI) H7N2 outbreak near Young was first detected in a free range and cage layer chicken farm near Young. The free range birds had potential exposure to waterbirds and a dam is located close to the free range poultry enterprise. Ducks have been reported on the property. Mortalities were first seen in the free range birds before clinical signs were seen in the caged birds, suggesting free range layers were infected before the cage layers. Avian influenza viruses are known to circulate in migratory and waterbirds in Australia. This incident appears to be a point source introduction by a wild bird, followed by adaptation and selection of a virus with high pathogenicity to chickens. A second infected property was detected and confirmed to be HPAI H7N2. This is a caged layer farm. Re-use of cardboard egg cartons is the most likely route of transmission from the first infected property to the second infected property and between enterprises on the first infected property.

The Emergency Animal Disease Response Agreement (EADRA) is a formal, legally binding agreement between Animal Health Australia, the Australian government, all state and territory governments, and currently fourteen livestock industry signatories (‘parties’). The EADRA covers the management and funding of responses to emergency animal disease (EAD) incidents. HPAI H7N2 is a category 2 disease, which means that government covers 80% of the costs and industry covers 20% of the costs. The industry costs are determined in relation to industries' gross value of production. Under EADRA, each industry party must take reasonable steps to ensure that its industry meets the cost sharing obligations of that industry. The Commonwealth may initially meet an industry’s cost sharing obligations, and that industry will then repay the Commonwealth within a reasonable time period.'

Statements by politicians and others about the outbreaks were factually incorrect. A comparative analysis on the number of avian influenza outbreaks in Australia between 1976 and 2013 demonstrates that most avian influenza outbreaks were in intensive housing systems. The last two outbreaks in 2012 and 2013 were in very large free range flocks. The risks of avian influenza in free range should be discussed in the context of the size of the flock and the stocking density.
The industry needs to learn from this – for example, dams should not be located anywhere near the range area to limit the potential for wild duck access. Most of us in the free range industry have been well aware of this issue. There is also a problem with operating different production facilities on the same property. Establishing Barn, Cage and intensive Free Range sheds in close proximity to each other, with staff moving freely between the different systems, is a disaster waiting to happen.
Posted by freeranger at 6:43 AM 2 comments: 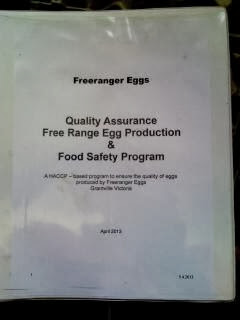 There is massive demand amongst free range egg farmers for help with preparing the documentation needed to comply with the increasing complexity of State and Federal regulations. Because there now is no active association representing the free range industry here in Victoria, we have been getting emails and phone calls from operators of free range farms asking how they can set up food safety and quality assurance programs on their farms.
We also get quite a few requests from interstate.
The simplest way, as we always tell them, is to adapt a generic program which has already been developed.
We have a program on the Freeranger website which is readily available on the Freeranger Club page and full info is available on the Food Safety page of our site. If anyone needs help adapting the program, please contact an egg industry consultant - or we can help. All you have to do is ask.
http://www.freeranger.com.au/food-safety.html
A heap of information is also available on the DEPI website and every registered egg producer has received a copy of the booklet on food safety. The document includes information to assist in meeting the requirements of the standard and manage the food safety hazards associated with egg production.