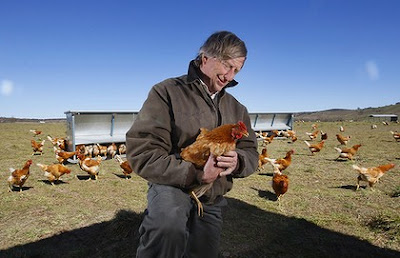 Photo: Andrew Meares
An analysis of egg industry data has confirmed what most consumers have suspected it is doubtful enough free-range layer hens in the country exist to produce the number of eggs labelled free-range.
From January 2006 to January 2007 the free-range flock would have had to grow by more than 37 per cent to match the increased sale of free-range eggs in the grocery sector, as recorded by the Australian Egg Corporation in its annual reports.
Over that time the number of eggs sold in the grocery market jumped from 811 million to 971 million and the proportion of those sold as free-range rose from 20.3 per cent to 23.4 per cent.
But at the same time the total number of eggs produced dropped from 3 billion to 2.8 billion, and the overall flock of laying hens decreased by 6 per cent.
The total free-range flock would have had to grow from 891,000 hens to 1.22 million to meet the free-range sales figures.
Greens M P John Kaye, who used his maths P hD to crunch the industry's data, said 200,000 free-range chickens appeared to be missing in action in 2006-07, and about 36.8 million eggs labelled free-range- just over l6 per cent - would have to have been bam- or cage-laid.
"Either the industry's making up the figures as it goes along or there's dodgy producers who are getting away with calling eggs free-range when they are not," he said." In some cases 'free-range' is nothing more than a marketing exercise to boost sales and prices."
With giant retailers such as Woolworths recording an increase in demand from consumers for free-range eggs from 32 per cent to 36 per cent over the past year alone, the anomalies in the chicken-to-egg ratio highlighted an urgent need for formal accreditation and labelling regulations, Dr Kaye said
Egg Corporation spokeswoman Jacquiline Baptista said it was not possible to reveal how many free-range layer hens existed in Australia, or provide year-on-year figures of flock growth, as total bird numbers came from the hatcheries that did not record which chicks ended up in which production system.
She said the Egg Corporation" supports any moves to investigate product substitution, as this practice undercuts honest farmers who do the right thing and also devalues their premium product".
The Egg Corporation said it used registered third-party auditors for its voluntary accreditation program, Egg Corp Assured.
But egg producer Tony Coote, whose Mulloon Creek Natural Farms east of Canberra supplies the Harris Farm stores in NSW, said consumers buying only Egg Corp Assured eggs might not be getting what they thought they had paid for because the Egg Corporation set the free range bar too low.
Large free-range operators were allowed to crowd thousands of hens in giant sheds containing all the flock's needs, so very few birds ventured out to forage.
"You can't believe all the pictures you see, with birds roaming on green grass. That's just not so in many cases." Mr Coote said.
CAGE
* Birds continuously housed in cages in a shed, with a minimum floor space of 550 sq cm per bird.
* Beak-trimming permitted.
BARN
* Birds continuously housed indoors but free to roam within the shed, which may have several levels.
* Stocking capacity not to exceed l4 birds a square metre.
* Beak-trimming permitted.
FREE RANGE (Egg Corporation and Primary Industries standing committee)
* Housed in sheds with access to an outdoor range.
* Stocking capacity within shed not to exceed 14 birds a square metre.
* Maximum 1500 birds a hectare.
* Beak trimming permitted.
FREE RANGE (Free Range Egg and Poultry Association of Australia)
* Unrestricted access to free-range run during daylight hours'
* Stocking capacity within shed not to exceed seven birds a sq m'
* Maximum 750 birds a hectare.
* Beak-trimming prohibited, as deemed unnecessary if above housing conditions are adhered to
Posted by freeranger at 6:09 AM