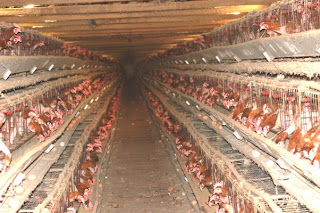 Hopefully, once we have a new federal government in place we may actually get someone in Canberra to listen!!!

Getting hens out of cages is a good idea, but producers need to be honest about they are doing and the way they describe their production systems.

WASHINGTON (Aug. 31, 2010) – His Holiness the 14th Dalai Lama has issued a statement in the wake of the largest egg recall in United States history. In a letter, the Nobel Peace Prize laureate decries the egg industry’s cruel treatment of hens and urges egg buyers to switch to cage-free eggs:

“The abuse we inflict on hens has always been particularly disturbing to me and I have always been particularly concerned toward how these animals are treated in industrial food production. I am troubled to learn about the practice of confining egg laying hens in tiny cages. In these cages, birds cannot engage in their natural behaviours, such as spreading their wings, laying eggs in a nesting area, perching, scratching at the ground, even standing on a solid surface. Each hen has less space to live than the very sheet of paper I have written this letter on. Turning these defenseless animals into egg-producing machines with no consideration for their welfare whatsoever is a degradation of our own humanity. Switching to cage free eggs would reduce the suffering of these animals.”

The Dalai Lama’s statement comes as a major U.S. movement against cruel and inhumane cages on factory egg farms is taking root. Prominent U.S. corporations from Burger King to Safeway are switching to cage-free eggs. Michigan and California have passed laws to phase out the use of cages to confine hens. California has also passed a law requiring that all whole eggs sold statewide be cage-free by 2015. In Ohio, agriculture leaders agreed to a moratorium on the construction of new cage egg facilities.
Posted by freeranger at 8:43 AM