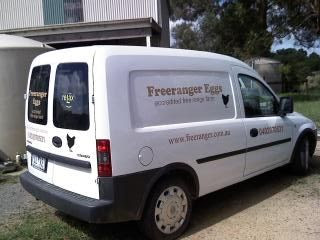 I took the Holden Combo delivery van in for its 30,000km service yesterday. Booked it in to a Holden dealership.
The service salesman did his usual stuff and convinced me that apart from the basic logbook service,brake fluid should be changed and the airconditioning checked and re-gassed. All extra costs of course.

Then an hour or so later I had a call to say that they thought the wiper blades should be replaced - at an additional cost of $90 because now it's not just a matter of replacing the wiper rubbers - the wiper arms come as a unit and the whole lot has to be changed. Anyway, I was a bit busy so I said OK.
My meeting finished earlier than expected, but the van wasn't scheduled to be ready for collection until 2 pm. I wandered past the dealer just after 11 am and could see the van parked outside.

It was still in the same position at 2 pm - so I could have picked it up at 11am - which would have been great. They had finished the service, but they didn't ring because they were waiting on the wipers to be delivered. When they finally arrived at around 2 pm - they were the wrong ones. I was asked if I wanted to wait while they got the proper ones in. I quickly declined that option !! They took the $90 off the $600 bill.

When I got into the van, there was a note about a tyre check hanging from the interior mirror. Their assessment was that the rear tyres were fine at least until the next scheduled service, but the tread on the front tyres indicted that they should be replaced prior to that service. The problem with that was that one of the front tyres was brand new. It had been the spare and was fitted for the first time about six weeks earlier following a puncture.

Talk about drumming up business !
Posted by freeranger at 12:15 PM

Roll my eyes! Wouldn't it be nice to leave your dealership happy and with the feeling that you haven't just been ripped off. We have a Nissan... same problem there too.

It would also be nice if the technician working on the vehicle was actually the skilled mechanic (the one you are being charged for on your bill) instead of the know-not-too-much apprentice.

At my last service I asked the bimbo at the service counter where I might find my car. She told me to go outside and press that red button thing on my remote because that is the button that tells me where the car is... like I don't know how to operate the key for the vehicle I've driver for 104000+ km. Wow what sharp customer service!

Wonderful Design Blogs, Such a great list. Thanks for sharing all these blogs all are very useful to every one