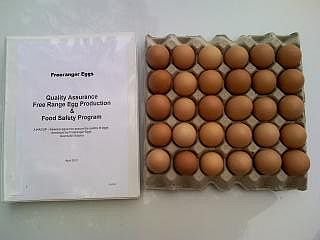 Many egg producers thumb their noses at food safety issues because they don't understand (or don't care) about the implications for consumers or for their businesses.

At last, here in Victoria the Government has sent out its requirements for meeting the new national standards for egg production which came into effect on November 26 last year. It gives producers until November 26 2014 to comply with egg stamping regulations!
Which means that for more than another year, many Victorian consumers will continue to have no idea where the eggs they buy actually originate. There have been many examples of substitution, with eggs brought in from other farms using different production systems - some of them interstate. These eggs are packed and marketed as being produced on a particular farm, to specific standards.
At least when stamping each egg with a unique farm identification code, consumers may be able to tell who is cheating. But until November next year the con merchants will have a ball.
Once the Department of Primary Industries has issued us with a code to put on our eggs, we intend to buy the necessary equipment and start stamping Freeranger Eggs even though we don't have to for almost 18 months.
It makes sense to us that consumers should be able to tell the source of the eggs they buy.
At Freeranger Eggs we've had a fully operation HACCP-based Quality Assurance and Food Safety Program in place for several years, so we don't have to do anything more apart from stamping the eggs.
One dumb thing in the new regulations is that eggs can be stamped on the farm where they are laid - or at the grading floor. (This means that smart operators of the grading floor can put on any identifier they like. What a loophole!)

Posted by freeranger at 1:52 PM