The Freeranger Eggs farm is an example of sustainable farming. The farm management plan takes a three pillars approach to how the farm operates. Animal welfare is one pillar, but equally important are land sustainability and food safety. Despite all the political bickering in Canberra over emissions trading scheme targets, some small businesses have been playing their part in addressing the problem. Freeranger Eggs has been getting on with mitigating the impact of carbon emissions. The farm's carbon footprint is limited by imposing a food miles policy for deliveries, using recycled materials and equipment whenever possible, utilising solar power and mechanical processes and an effective waste reduction programme. As a result, the 1200-chicken farm generates only about 60 tonnes of CO2 each year. But it is better than carbon neutral, it is carbon positive. The average organic matter in soil tests was 4.1 per cent in 2004, in 2006 it was 6.0 per cent, and in 2009 it was 7.9 percent. Calculations based on 2-inch deep samples, show that over those five years the farm sequestered about 14 tons of CO2 per acre or four tonnes of carbon per acre on the grasslands. Further testing and calculations have not been carried out because there has been a total lack of interest in the results. 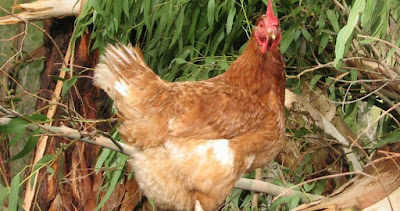 The farm applies no chemical fertilisers, herbicides, or pesticides. This policy increases the biological life in the soil and increases the rate of carbon sequestration. Rotational grazing is practised on the pastures – taking advantage of photosynthesis to pull CO2 into the plants and then into the roots from where it transfers to the soil. In addition, every year at least another tonne of CO2 per acre continues to be sequestered by the regular growth and replacement of Kangaroo Apples in the main paddocks. Native vegetation has been protected on approximately 100 acres of the property and regeneration there sequesters a further tonne of CO2 per acre. This brings a grand total of 1500 tonnes of CO2 sequestered on this property over five years – an average rate of 300 tonnes per year compared with the farm's carbon output of around 60 tonnes. On days of full sun the solar panels on the farm shed generate 13-17kW of electricity a day and as on average the farm consumes just 10kW a day it helps the bottom line. Freeranger Eggs gained international recognition in 2012 as the Australian winner of the Energy Globe Award.
Posted by freeranger at 9:04 AM