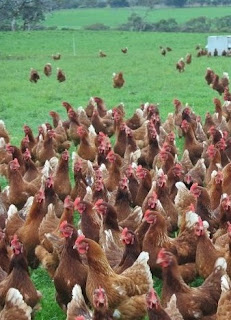 The actual Appendix states at 2.1.4 “The maximum acceptable densities for free range birds For layer hens a maximum of 1500 hens per hectare.” Then it refers to meat birds.”Meat chickens, a proportionately higher stocking density than for layers may be used.” The intent is crystal clear but in their dodgy version of the code, the industry left out all references to ‘meat birds’. The plan was clearly designed to deceive Ministers and con them into accepting that the Model Code did not establish a maximum stocking density and to accept their arguments and those of the major supermarkets for a 10,000 hen per hectare density.
Posted by freeranger at 10:45 AM