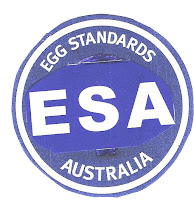 This could be the new logo and trade mark for the updated version of the Australian Egg Corporation's quality assurance program.
AECL claimed that all the paperwork was with the ACCC, but that was denied by the ACCC. There have been a number of objections to the proposed name and trade mark application and all the paperwork is still with IP Australia which says it is unlikely to make any decision before 2012.
It seems that Standards Australia will not be happy with the proposed name as it clearly implies that the standard has been developed by Standards Australia when it really is just an industry proposal cobbled together by a private company - the Australian Egg Corporation Ltd.
In its latest newsletter, AECL says that the new standards, logo and trade mark should be ready for approval by the Board in April (next month) and will be revealed to AECL members in May.
We somehow doubt that timeframe will be met. All previous deadlines have been missed and if this application isn't processed until next year, it will be back to the drawing board for the AECL!
Posted by freeranger at 2:50 PM