We have been doing everything we can to try to maintain yolk colour in our eggs – everything that is short of putting colouring additives in the chook food.


It's always difficult at this time of year when everything is so dry and there is little green in the paddocks.

We are feeding as much green leafy stuff as we can from the veggie garden and encouraging purslane in the pasture. 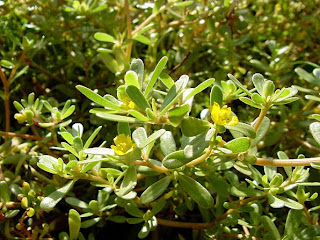 Purslane is a rich source of vitamins, with vitamins A, B, C, and E contained within the plant. Purslane is high in carotenoid content, including Beta-Carotene. Beta Carotene is one of the natural substances which helps to generate deep coloured yolks. Calcium, magnesium, potassium, folate, and lithium are also found in the plant.

For all those reasons we are trying to grow as much purslane as we can because we reckon it's a much better bet than putting colouring additives in the feed – which is the choice made by virtually all other egg producers. Many of the colouring additives used by egg producers are synthetic but even the one's processed from things like capsicum and marigold can have adverse effects on people with allergies.We sometimes hear people saying that they are allergic to eggs - well it's probably not the eggs they are allergic to it's more likely the additives put in the chook food for cosmetic reasons.
Posted by freeranger at 2:40 PM