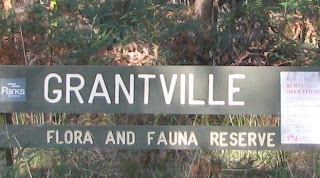 I must say that I have been impressed by the 'fuel reduction' burn just conducted in part of the Grantville Flora and Fauna  Reserve (even though I have great doubts that these burns reduce the risk of wildfires).
It appeared to have been reasonably 'cool' and well targetted which would have allowed many small reptiles and mammals to escape.
The burn was close to our farm but was conducted as an 'asset protection' measure alongside an old and inappropriate subdivision known as the Adams Estate. It would be a better long term outcome for the State Government to buy-out the people who shouldn't be there anyway. It remains to be seen how much future  'protection' they will enjoy.
Unfortunately quite a few of the families living there have trail bikes and they seem to have no understanding of their responsibilities to the community. There's nothing wrong with motor bikes - we have three on the farm - the only problem is their thoughtless use in the bush. It makes my blood run cold (or hot) when I hear the turkeys revving their bikes through the reserve with hot exhausts and sparks flying on fire ban days. They just don't get the risks, and it's not only kids. There are many 'mature' riders who are oblivious to any potential problems they are creating with wildfires and their own financial liability. Most of the riders here may be under-age children but their parents don't seem to realise they will have to foot the bills for damage caused by their precious offspring - and they could lose everything as a result!!
If you want to see more about the values of our bushland, have a look at http://bassbush.htmlplanet.com/
I'll try to get some photos of the results of the recent burn up on that site.
Posted by freeranger at 10:59 AM