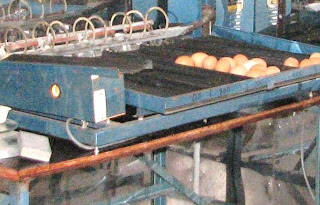 As part of our program of continuous improvement, we have installed a new (well, second-hand) candler/grader.

We had an Ego-Matic from the 1950's and this one is also an Ego-Matic - but a later version. It came with its own table and is at a more ergonomically efficient height which hopefully will eliminate some of the back pain associated with standing there candling and grading eggs.

Most of you reading this will know what candling is - but for those who don't, it's passing the egg over a light to see any imperfections in the egg (cracks in the shell, bloodspots or a large air cell etc).The eggs are run down the ramp on the left hand side of the machine, over the light and then each egg is picked up by a moving bar. Cantilever weights then allow the egg to be deposited in the right chute, depending on its weight.

The new machine is quieter than the old version and is probably more accurate so once we are used to it, we shouldn't have to carry out as many checks with the electronic scales.

That will speed up our grading and packing process.
Posted by freeranger at 6:56 AM