Changes are being drafted to national standards and guidelines for farm animal welfare. New standards will replace current Model Codes of practice for many farm animals. The Model Code which covered free range poultry has already been thrown out by politicians and replaced with an absurdly high stocking density standard. Under the Code, Free range density was limited to a maximum of 15,000 hens per hectare but politicians trashed that and approved 10,000 hens per hectare to be classified as free range – putting hens and consumers at risk through the build up of pathogens. Despite their victory on conning politicians lobby groups and industrial-scale producers will push for an even more extreme relaxation of standards. This may be the last opportunity to return sanity to the issue of stocking density as there was  no scienece behind the move to allow an intensive density. It's not just a  welfare issue. Such high stocking rates contaminate soils and waterways.
The standards and guidelines are being developed under the direction of an Animal Welfare Task Group, which includes representatives from each of the departments responsible for animal welfare, the Department of Agriculture, Water and the Environment and the New Zealand Ministry of Primary Industries. standards and guidelines currently under development, public consultation and endorsed standards and guidelines for farm animals are available at animalwelfarestandards.net.au. 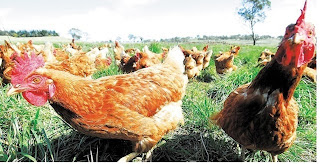 Posted by freeranger at 8:56 AM